When was the last time you got out to the most stunning national park in Texas? Whether you’ve been there twenty times or not at all, here are more than a dozen breathtaking destinations—where the Rio Grande bends and the forests float and the canyons sing—that’ll make you want to go, and go again. 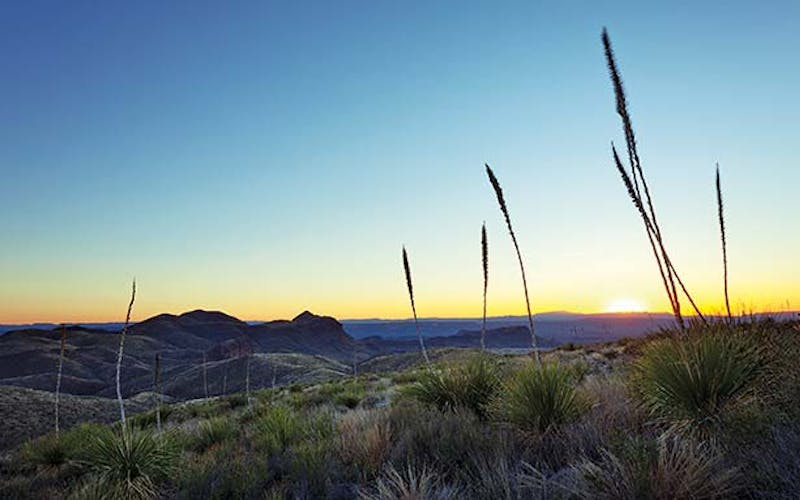 It is the farthest corner of Texas, if not physically then at least in spiritual and psychic terms. Here, where the mighty Rio Grande pirouettes upward, shifting its trajectory from the south toward the east, cutting through ancient mountains on its six-hundred-plus-mile run to the Gulf of Mexico, is the big bend that defines this majestic, stark land, a country whose lofty peaks and dramatic canyons and dazzling striations beg exploring and belong to no one. Though people have passed through these reaches for more than 10,000 years, from Clovis-era tribes and nomadic bands of Chisos Indians to the Comanche and eventually Anglo ranchers, the area defies all human claims on it. It’s of no surprise that sixteenth-century Spanish explorers, confronted with the region’s vastness, labeled it el despoblado. The uninhabited.

It could have been difficult to imagine this wild country as a park, let alone a national one—its plants are too thorny, its washes too otherworldly, its buttes too strange-looking. But for certain Texans during the late thirties, such as Walter Prescott Webb, who worked as a consultant with the National Park Service, this “earth-wreck,” as he described it in 1937, deserved precisely that demarcation. “If it were thickly settled, it would be out of the picture,” he wrote. “Because it seems to be made up of the scraps left over when the world was made, containing samples of rivers, deserts, sunken blocks of mountain and tree-clad peaks, dried up lakes, canyons, cuestas, vegas, playas, arroyos, volcanic refuse, and hot springs, it fascinates every observer.” A state park already existed in the area, and the Civilian Conservation Corps had been working on trails; soon fellow boosters, like Amon Carter, had persuaded Texas legislators to purchase 600,000 more acres of ranch land and turn it over to the feds. Big Bend National Park was established in 1944.

Seven decades later, it is one of the least visited national parks in the country—beauty notwithstanding, it’s just so damn far away from everything. But that distance from civilization is what makes its hold so powerful; I know, because after more than ten years of visiting the park, I am still compelled to return, over and over again. In fact, early this year I spent nearly three weeks in Big Bend with the goal of putting together a field guide that would inspire every Texan, from casual adventurer to seasoned backpacker, to get out and visit (or revisit) this natural resource of ours. A few others who know of Big Bend’s wonders—Matt Bondurant, Sterry Butcher, James H. Evans, Naomi Shihab Nye, and John Spong—also contributed firsthand experiences. Because we all know this: whether you’re pausing at the famous Window or climbing up Pinnacles Trail or navigating the rapids of the lesser-known Mariscal Canyon, this land of cracked earth, of dancing shadows, of endless skies, will change you.