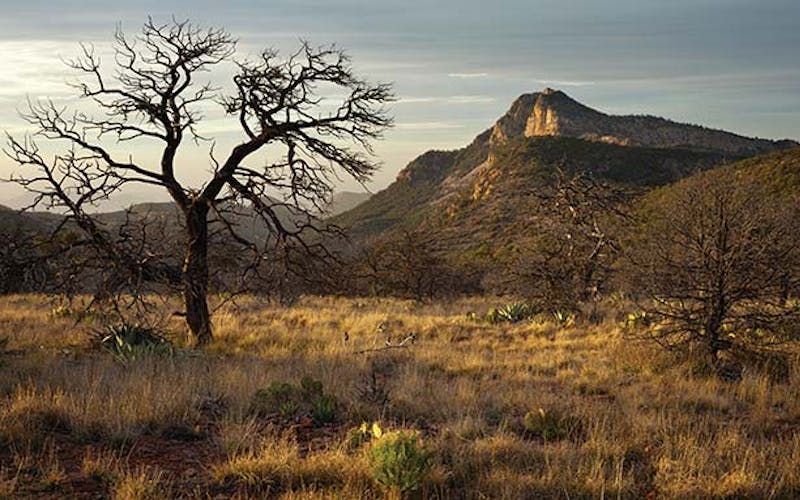 At 7,832 feet, Emory Peak is not the highest point in Texas, but it is the highest in Big Bend, which means it should grab every capable hiker’s attention. Yes, it’s a steep, five-mile climb not for the faint of heart, but the bird’s-eye perspective from this stark lookout, reached by an ascent that begins just off Pinnacles Trail, is so ridiculously sublime that you’ll quickly forgive the radio antennae and solar panels that cap the peak (yeah, they’re ugly, but ultimately beside the point).

Returning from an overnight in the mountains, I stowed my backpack in a bear-proof box at the Pinnacles split, grabbed a water bottle and a pocketful of snacks, and started up. Black clouds loomed to the east, but I kept my eyes on the trail, surprised to see Cretaceous snail and clam fossils similar to those at the mouth of Santa Elena Canyon. Rising above the tree line—and I’ll admit I was huffing and puffing by now—I was greeted by rays of sun slanting through the rolling cumulonimbus on the horizon, a painterly scene worthy of J. M. W. Turner. Then it was a rough scramble over a stack of fractured boulders to the peak, where my efforts were rewarded with an eternal view. Like the extinct Quetzalcoatlus northropi, a giant flying reptile that once thrived in Big Bend,
I felt myself a creature of the sky.