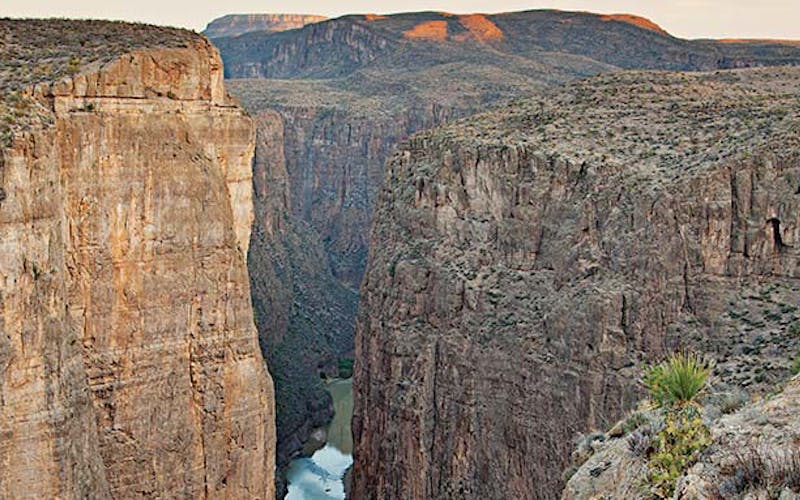 I’d intended to cross the Mesa de Anguila—a plateau on the far southwestern edge of Big Bend—to reach Entrance Camp, at the head of Santa Elena Canyon, where I knew that sandy shores would be the ideal spot to pitch a tent and enjoy the sunset. I’d been told this far-out zone gets few visitors, which held even more appeal. But, like an idiot, I’d left my map in the car, and now I found myself alone on the flank of La Mariposa peak. Too far from the trailhead to turn back, I faced a choice. To my left, a treacherous incline led to a high notch; to my right, a few cairns showed a rocky descent. Worried the climb might dead-end on the serrated ridge, I imagined the cairns had been placed by a well-meaning soul facing the same dilemma.
I followed in the unknown Samaritan’s footsteps.

Getting lost is no fun, but this was different. I had plenty of water, and I discovered seeps in the rocks along the trail should I run out. As I unwittingly headed away from my intended camp, I entered a hushed basin; the False Sentinel formation and other hoodoos stood silently above the grasses. Reaching a willow-studded ravine, I was struck by the smell of creosote and the vaguely lemony scent of the Rio Grande. Over a hill lay Metate Camp, where telltale holes dotted the rocks upon which local tribes once ground their grains. I might not have been on target, but I’d ended up right where I belonged.