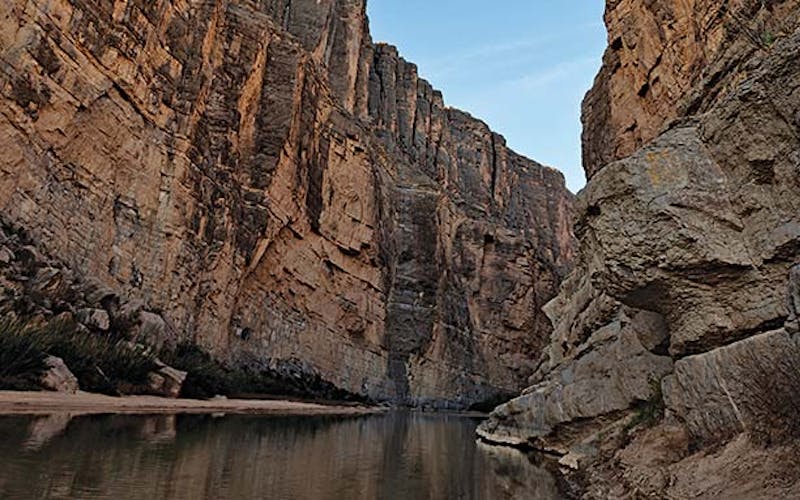 Few sights rival the view upstream into the 1,500-foot gorge known as Santa Elena. Its limestone cliffs and rocky depths deterred explorers until 1899, when geologist Robert T. Hill, working on behalf of the U.S. Geological Survey, headed to Big Bend to take on the “longest and least known” stretch of the Rio Grande. He and a team of five made their way through the canyon by dragging boats over rock slides; it took three days to cover seven miles.

Fortunately, modern-day outfitters have simplified canyon exploration, and today you can sign up for a catered float from Lajitas or rent a canoe and paddle the slot independently. (At low water, you can “boomerang” from just downstream to a small side canyon two miles upriver and back.) But there’s also the easiest approach: on foot, which is how I got there. The trailhead lies at the end of Ross Maxwell Scenic Drive; after a quarter mile I joined an ad hoc crew of hikers—from Louisiana, China, Germany, and who knows where else—marching merrily up the concrete path. We came over a bluff, where seashell fossils dotted the rock wall, a reminder that the ocean once covered much of this region. The path then turned to dirt and dropped to the river, prompting oohs and ahs that echoed off the canyon’s walls. Swallows and songbirds hung in the breeze. I found a spot to sit among the river-worn boulders and listened to the gurgling lullaby of the Rio Grande.