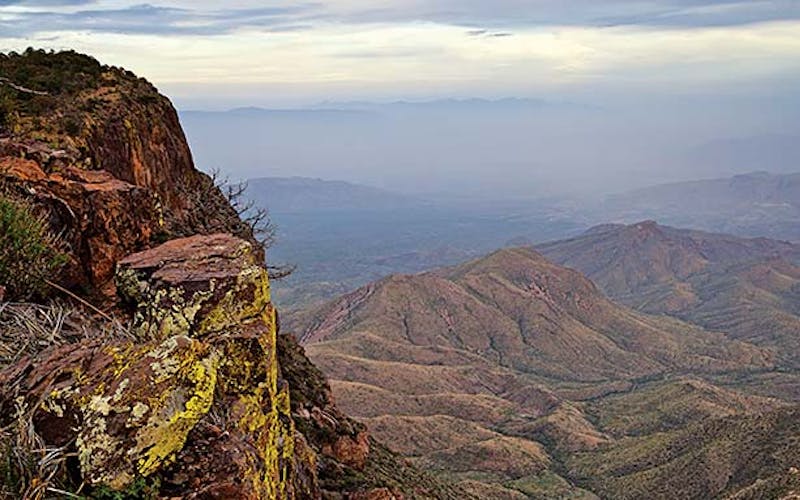 You can keep your Grand Canyon, Arizona. We’ve got our own South Rim. Here, atop the cliffs of the Chisos Basin, along a bruising circuit that fitness freaks tackle in six to eight hours, you can peer up to one hundred miles into Mexico. Taking in the mountains that stretch into Chihuahua and Coahuila is a stupefying and, better yet, often private exploit—unlike at that other South Rim, which is bounded by blacktop and gets ten times the annual visitors.

I considered this while standing, very much alone, near where the southeast and southwest portions of the rim converge, ten miles into my hike. Across the desert before me lay an array of strange formations, like figments of Salvador Dalí’s imagination. The dun-colored prong of Elephant Tusk stood to the west, while a sliver of silver beyond the hills hinted at the Rio Grande. In the distance, I could also make out Mexico’s Sierra Ponce, a huge butte twenty miles away marking the edge of the Terlingua Fault.

Sweat and determination are really the only way to reach these heights, and I’d arrived at this overlook via the tough Pinnacles Trail. Though the fourteen-mile South Rim Loop can be conquered in a day, I intended to camp so as to bask in this “sky island,” an ecological designation for the vestigial mountain forest that features native trees such as the Douglas fir and Arizona cypress. The Colima warbler, a bird found nowhere else in the U.S., also nests in these parts. It was too early in the year for it to make an appearance, but as I settled in, I heard the crunch of hooves; a Carmen Mountain white-tailed buck, a species adapted to the high country, was strutting behind me. I smiled. A trek into the upper Chisos is a Texas rite of passage.