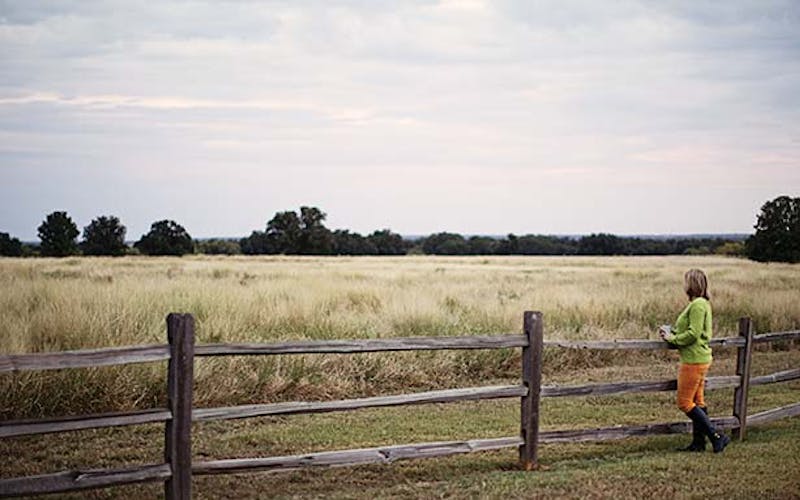 There is no tv in your room. Your smartphone will barely work, if at all. There is Wi-Fi, but you’ll forget about it. Rancho Loma, Texas’s version of the French Laundry, is three hundred idyllic, tree-dotted acres that will inspire you to shake off all digital preoccupations and revel in an emancipation of the sort  that I imagine prompted Robert and Laurie Williamson to decamp from TV jobs in Dallas for an 1878 stone farmhouse seventy miles south of Abilene. They opened the restaurant in 2003 to ward off lonesomeness and built the accommodations in 2012 to indulge sated and happy visitors possessing neither the desire nor the capacity for a dark country road. The couple’s artisan aesthetic imbues every inch of the place, especially the five guest rooms, where chrome and polished concrete offset sheepskin rugs and Frette linens; Robert’s black and white photos of horses are balanced by the hazel prairie grass and blue skies framed by the sliding-glass doors. Notably absent is the long list of rules endemic to small-town auberges. Instead you’re invited to explore the organic garden; sit poolside and watch the chickens hover at the shallow end to feast on unlucky bugs; visit with a black-mouth cur who, in an overture of friendship, offers up his belly; and chat with strangers, letting your hair and guard down with the ease that comes from being in on a secret together. And then, finally, you amble into the dining room for Laurie’s simple, sophisticated food, such as a double-rib venison chop, Columbia River king salmon with chanterelles, wood-fired pizzas with smoked mozzarella and soppressata, and chilled peach soup with finger lime “caviar.”

Lest you get to feeling too pampered, the local fauna will make their presence known—a posse of industrious ants atop your chaise longue, a shed snake skin under a live oak, a cold, wet nose on your knee in the dining room. You either like that kind of thing or not. It’s okay if you don’t. I wouldn’t mind keeping the place to myself. —Courtney Bond

Stay: Unless you live nearby, you’re going to want to stay. Rates range from $175 to $225 and include breakfast.