Texas has nearly 200,000 miles of rivers and streams—more than enough water to cool you off as the weather heats up. To narrow your choices a bit, we’ve picked the twenty best river trips we could find, from running class III rapids on the Pecos to floating down the Guadalupe with a beer. So read up, head out, and dive in. 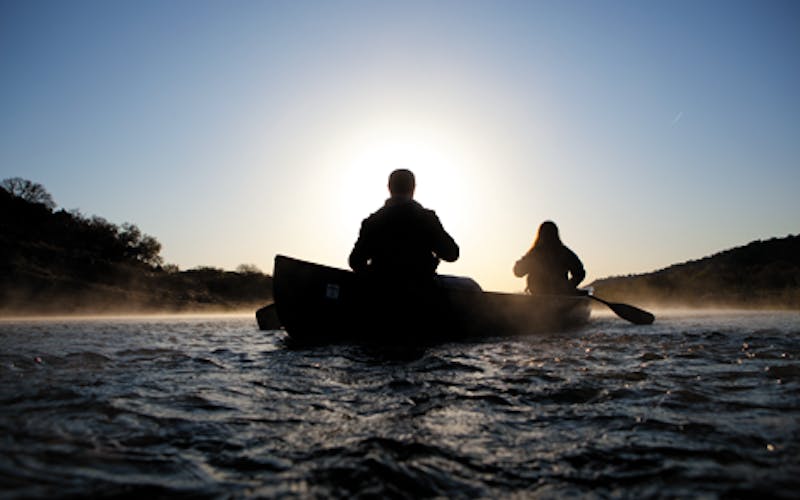 With our long history of drought and flood, we know in our bones how important water is to Texas. Without it, everything dies. But though we obsess over the state of our reservoirs, we sometimes overlook the moving bodies of water that feed them. Texas has fifteen major river basins, which irrigate our crops, power our cities, and give us water to drink. But such demands mean that there is often little water left for the rivers themselves, which is cause for concern. Healthy rivers, with abundant plant and animal life, are a sign of a healthy environment. They’re also wonderful places to play, relax, and sightsee—or even test your mettle.

With that in mind, I set out to find the twenty best stretches of river in Texas to showcase the variety of experiences that are possible on—and in one case, alongside—moving water. Some of these trips took a few hours, some a few days; I drifted through a desert in a snowstorm, battled a West Texas rapid, and sipped whiskey while gazing up at the stars. In short, there’s something for everyone on this list, even if you’ve never sat in a canoe in your life.

I like to think of rivers as time machines with two primary functions. The first helps us live more fully in the present moment; the second allows us to sense the ever-present hiss and rumble of geologic time. The history of this country, after all, is not written in stone carved by men, like the cathedrals of Europe. It’s written in the canyons our rivers have carved across America, in their forks and sandbars, and in the forests and hills they run through. It’s the history of the continual creation of the earth; on our state’s rivers you will always be able to find paradise.

The Rules of the River
The right to free passage on our waterways rests on a vague 1863 ruling by the Texas Supreme Court that affirms the “settled policy and cherished object of the state to guard its navigable streams from obstruction and to secure and improve them as common highways of trade and travel.” Without getting mired in the question of whether floating down the Guadalupe with a beer in your hand qualifies as either trade or travel, the fact is that there is very little publicly owned riverfront property in Texas, and the laws on where the river ends and private property begins are often unclear. So . . .

Rule number one: Respect private property. Landowners dislike trespassers, and even if you are camped lawfully on a sandbar, someone’s home or hunting cabin may be just over the rise, and those folks will be fully aware that you are there, especially if you’re throwing a party. If challenged, be polite and be prepared to leave. You may also want to carry cash so you can offer to pay for the use of a site. That said, I’ve spent many evenings at the water’s edge and have never been hassled.

Rule number two: Respect the river. When you leave your campsite or picnic site, remove any trace of your presence. Take your trash home and bury your business.

Rule number three: Respect the elements. Pack your stuff in waterproof bags (there’s a difference between waterproof and water-resistant). Carry a hard plastic case for your camera, cell phone, et cetera, and fasten everything in. It’s one thing to get wet, quite another to get wet and lose the cooler. Also, no cotton underwear.

What to Bring
Many places mentioned in this story don’t offer a particularly convenient canoe rental or shuttle service, so it will probably be easier to bring a boat with you. Take water (or a water filter), first-aid gear, and a wet suit and neoprene booties and gloves if it’s cold. And wear a flotation device even on the calmest-looking river. Webbing lines attached to the front and rear of your boat are essential for portaging and guiding it down tricky rapids.

When to Go
May and September are great months for boating, and the recent wet winter has raised water levels (though two years of drought mean they’re still not as high as one would like). The U.S. Geological Survey (waterdata.usgs.gov/tx/nwis/) gives stream-flow data that will help you plan, but note that flow can depend on dam release and changes quickly. A heavy rain upstream can cause severe flooding without your even seeing a cloud, so be careful where you camp; this evening’s primo spot may be a torrent in the morning.

What to Do With Your Car
Make sure you park legally. On some trips you may leave a vehicle unattended for a couple of days; you don’t want to return to find that it has been ticketed or towed. Trips are easier with two vehicles; with just one, you’ll need to arrange a shuttle or rely on the kindness of strangers to get back to where you started from. Parking should be easy, unless otherwise noted.