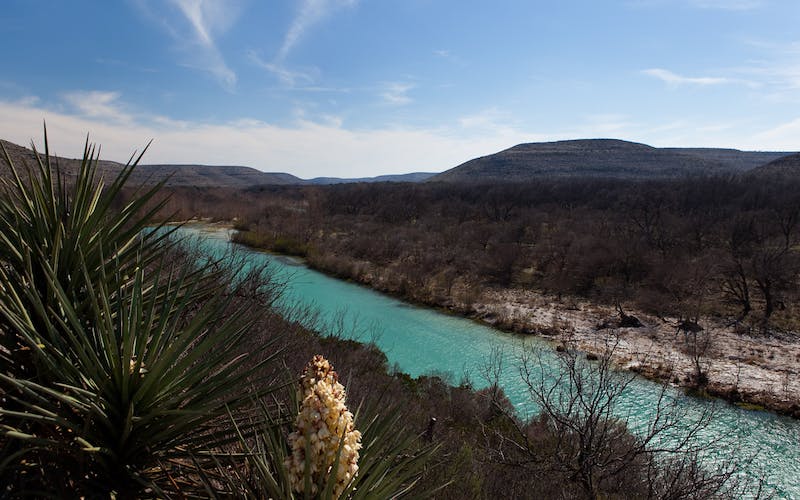 If the Devils River were a woman, Willie would have married her twice and we would be crying into our beer as he lamented her wicked ways. You might be tempted to dismiss it as the Pecos lite, but the Devils packs a bigger punch into less than one hundred miles. It’s another pool-and-drop river that runs through rugged terrain similar to the Pecos, but the thirty miles or so that separates these two makes for noticeable differences in topography and vegetation. The gray-blue water is more blue than gray (the remote, hostile environment has successfully safeguarded the pristine water quality), the rocky hills are a little greener, and the banks are lined with trees. Though the dam on the Rio Grande that created Amistad Reservoir backs up the flow in the Devils’ lower reaches, this is the one river in Texas that’s never been dammed itself, and every blade of grass and snatch of birdsong resonates with unfettered exuberance.

But boy, getting down the Devils is hard work. They call it a “wet” river, which means that you’ll be in and out of your boat as you pull it through endless shallows and down rapids, all the time hanging on to that webbing for dear life while yelling at your partner. (Think twice before taking your significant other. The Devils is a jealous river.) The rapids are fast and pugnacious and come up on you quickly, so expect to simultaneously try to find the best line of approach and the right channel through the dense canebrakes before you are swept into a rock wall. If you go the wrong way, you can be lost in the cane jungles for half an hour. (We’re having fun, right?) In addition, the landowners along the Devils have a reputation for antipathy to boaters, so the first safe and legal campsite is at the Devils River State Natural Area, fifteen miles from Baker’s Crossing, which makes for a long day’s paddling.

Is it worth it? Yes, a hundred times yes, and the bonus is that you get to see the Devils’ great secret, the grand Dolan Falls, which is half a mile or so below the state park. Pay attention on your approach, as the drop is ten to fifteen feet into strong currents. Portage river right and lower your boat back into the water from the rocks. Before you leave, make sure you take your picture in front of the largest continuously flowing waterfall in Texas. Three miles later you’ll come to the last major hazard, Three-Tier Falls, which has a nasty blind entrance—stop and scout your line carefully. From there it’s only four miles to the take-out, which you’ll recognize by the rust-colored, gray-striped roof of shuttle operator Gerald Bailey’s house, one of several in this 1970’s-vintage subdivision. (If it’s not too windy, Bailey may also fly his large pirate flag.) The development is a surprising sight after a couple of days of seeing only five or six houses. As much as I would like to be able to afford a home here, I’m glad that the Nature Conservancy is working with local ranchers to protect the watershed, including nearly 150,000 acres in the Devils River basin. A river this beautiful needs proper care and attention.