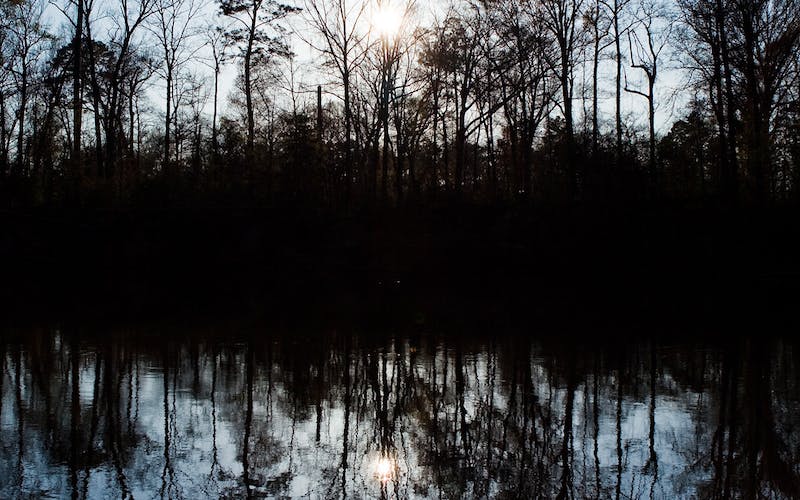 Between Lake Palestine and B. A. Steinhagen Lake, the Neches winds through dense hardwood bottomlands and deep pine forests, with sandbanks that gleam bone white in the sunshine. (Indian tribes called it the Snow River.) On the slow, dark water, hidden by steep banks and overhanging branches, I felt as though I was drifting through a sun-dappled dream.

This part of Texas is rich with history. Early Anglo settlers disappeared into the thick woods and thrived on the abundance they found there, and for a while specially modified flat-bottomed steamboats carried the pelts and honey these pioneers produced to Beaumont, from where they eventually found their way to Galveston and New Orleans. But the timber industry soon jammed the river with thousands of felled logs, crowding the waterway. Although no longer virgin, the forests have grown back and boast as great a variety of trees—hornbeam, water oak, ash, possum haw, maple, cypress—as any ecosystem in the country.

The best examples of those fairy-tale bottomlands are in the northern section between U.S. 84 and Texas Highway 294, but that is remote country, and the traveler can encounter a constant series of logjams, making progress extremely difficult. (Serious Neches river rats carry a saw.) Your best bet is a relaxing two-day trip between U.S. 69 and Recreational Road 255, just north of Woodville. The put-in is a little tricky, but the river here is wide and smooth, the water is that rich East Texas tea brown, and the high, sandy banks are topped with tall longleaf, loblolly pines, and thick brush. Immediately on your left is the Upland Island Wilderness Area, part of the Angelina National Forest, which is broken up by swaths of palmetto swamp and sandy, yucca-dotted tracts. Two miles in, you will come across the Neches’s only natural waterfalls, Rocky Shoals, which can be a mere two feet high in low-water conditions. Below that, numerous creeks flow into the river as it moves eastward through woods that cry out to be explored. (Though be aware that, because of what are called inholdings, even when you are in the national forest, you may be on private property. This applies to a lot of the river frontage, so look for the little brown signs that signal you are on public land.) There are good sandbars for camping beginning at the halfway mark, or you could hike the quarter mile through the forest to camp at Bouton Lake. The take-out is on Rocky Creek, which joins the river from the right just before the 255 bridge. Be careful, though: If you leave your boat anywhere, lock it up. My paddling partner hid his canoe when we left to get his car and returned just in time to give chase to an old woman who had dragged it out from deep in the bushes and was driving off with it perched on her roof.

In retrospect, it’s kind of funny when Granny tries to make off with your boat. But it’s not so funny when progress, for want of a better word, steals your river. In 2006 the U.S. Fish and Wildlife Service established the Neches River National Wildlife Refuge, which protects much of the area from development. But Texas could still create a reservoir site near the town of Rockland, which would flood a part of the section of the river described above. To protect the Neches for future generations, Congress would have to designate it a National Wild and Scenic River. If you want to get involved, consider joining a group like the Texas Conservation Alliance, which is working toward this goal.