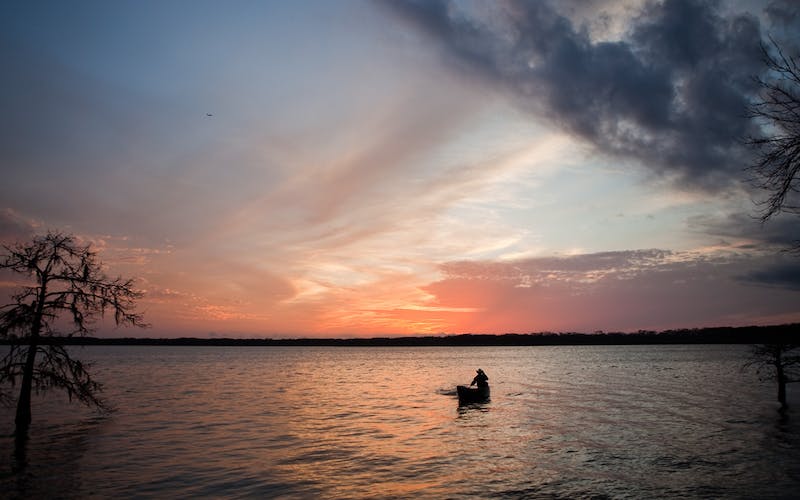 Many picturesque river trips require a five-hour drive to the middle of nowhere; others are nearly as accessible as your local Costco. Houstonians looking for a quick change of scenery should head east on Interstate 10. Once you get through Baytown and Mont Belvieu, the sprawl suddenly ends; the highway lifts off and flies across a big estuary, only to land in a flat delta; and the horizon is empty. You are in the Trinity River Basin, a maze of sloughs and bayous created by thousands of years of sediment deposit and the subsequent shifting of the main river channel, which itself winds unconcernedly through an untidy labyrinth into Trinity Bay. Cypress trees dominate the landscape and constitute the largest cypress forest on the Texas coast.

To experience this swampy wonderland, make your way across Lake Charlotte and along Mac Bayou to the Trinity, which takes you through three ecosystems and many centuries of human history. The discarded shells underfoot at the put-in are evidence that long ago this was an American Indian campground. The area was also the site of skirmishes that established the border between Louisiana and Texas (New France and New Spain, respectively), and in the nineteenth century pirates laid low and counted their treasure in these secluded backwaters.

Mac Bayou is hidden behind the small island directly west of the park. (I found it using Google Maps.) If the water is high enough, you can paddle right into the dense cypress forest that surrounds the entrance. The bayou takes you to an old barge canal where the banks are covered with willow bushes, which in turn leads to the Trinity River. Wide and slow, the river is lined with familiar bottom-land hardwood trees like sycamore, cherrybark oak, and the pretty but invasive chinaberry. Fish were jumping all around my kayak; there are also egrets and several other heron species, as well as ducks and cormorants. Eagles and ospreys nest in the vicinity, feeding on the plentiful fish population that also supports alligators and beavers.

Travel north, away from the low thrum of I-10, for as far as you feel like going, but allow plenty of time to explore the cypress swamp, which is worth a few idyllic hours. If you want to learn more about the science of what you’re seeing, join one of local guide Tom Douglas’s excursions, organized in conjunction with Houston’s Sierra Club chapter. Douglas is an enthusiastic and knowledgeable guide, and you will find out more about swamp hydrology and ecology than you ever thought you needed to. From I-10 the Trinity delta looks flat, calm, and unchanging, but it is actually in furious, slow turmoil, as trees, animals, and birds fight to prosper in the cycle of floods and tides that flow through the river basin.