The Hunter
2/5
The Gun-Rights Advocate 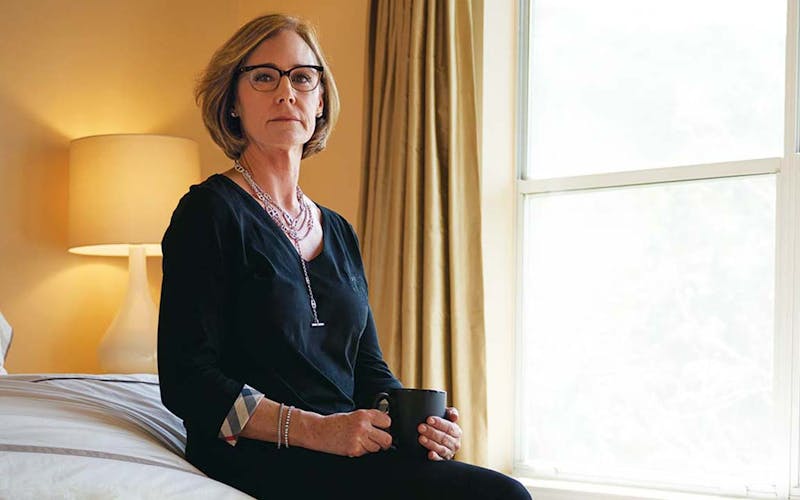 Ialways had this feeling that Lex wasn’t okay. He was born in 1992, but it wasn’t until he hit fourth grade that we learned something was really not okay. That’s when Lex was diagnosed with Asperger’s.

Doctors said there was no medication that Lex could take. We brought him to therapy because they recommended role-playing-type things. But he hated it. He often just sat passively looking out the window for the entire hour. We tried everything. Nothing helped.

We’ve lived in Austin with the kids since 1999. When Lex was younger, he would play with his three siblings. They’re all one year apart, and Lex is the oldest. But as he grew up, he became verbally abusive, and the more they kind of became afraid of him. When Lex started becoming more critical in his illness—I would say it was in eighth grade. And we didn’t realize it, but I believe he started showing signs of schizophrenia. Then he started getting more and more detached the older he got, which is a pattern. Kids hit their late teens, and that’s when schizophrenia kicks in. He was spending more time alone, more time in his room.

That was all up until his eighteenth birthday. That was the day I got a call from Joe McBride up at McBride’s gun store. As soon as they opened, Lex walked in there and tried to buy a gun. Joe said, “Your son’s here. He looks like he’s on PCP, and I’m not selling him a gun.”

All of a sudden, I felt that we had entered a very, very dangerous zone. I called the police, and the crisis-intervention team came over, and they sat down with [my husband] Scott and me. They said, based on their talk with Lex, “We agree with you that this young man is unstable, in crisis. We don’t exactly know what’s going on, but we do not believe that he should have firearms.”

But they said there’s nothing they could do to prevent Lex from buying a firearm. There had to be an incident. Like he had to be arrested for some reason. He needed to be found a danger to himself or others before the law would get involved.

He went to Academy and Cabela’s and started buying guns. He bought pistols, he had a long gun.

That’s when we really started getting scared, because he had guns now. But Scott always said, “We just have to love him unconditionally. We can’t change him. He’s not going to hurt anybody. He’s our son.” This is the worst part. You don’t know somebody’s going to do something till they do it.

But I’ll tell you, toward the end, this is what happened. One night in 2013, Lex said to Scott, “Come outside. I want you to look at the Skilsaw. It’s not working.” So Scott gets up and walks around to the side of our house, where it’s dark, and Scott said that as he was walking out there, the hair on the back of his neck started to stand up. Scott begins bending down to get the saw, and he turns around and looks at Lex, and Lex has a pipe wrench raised. Scott says, “Lex! What are you doing?” And Lex, of course, says, “Ha! Did I scare ya?” Which is what he would always say.

The next night, Lex again came in and said, “Come out and help me fix the Skilsaw.” And Scott said, “No, I’m not going out there at night.” Scott, at that point, was scared. He said to me, “I think Lex is trying to kill me.”

I asked him, “What’s going to happen?”

Scott said, “Well, if there’s an altercation, I hope I prevail. But if I don’t, if Lex kills me, I know you guys will be safe and Lex will get the help he needs, finally.”

It was just any other day. I came home from work at five o’clock. I had a dinner planned with friends, and I was saying, “I’m tired. I don’t know if I’m going to go out.” Lex said, “You should. You never go out.”

So I said goodbye to Scott. Lex had been kind of pacing around, which is not unusual for him. He paced. But he was waiting for me to leave, of course. I pulled out of the driveway, and he must have gone right in and done it.

I got to the restaurant, walked in, sat down, and [my youngest son] Max called. I answered it and Max is screaming, “Lex stabbed Scott! Come home!”

The way that it happened—well, the police said Lex walked in and hit Scott on the back of the head with a pipe wrench. Scott spun around in his chair, and Lex stabbed him twice. And those two puncture wounds were fatal. The ER doc would say that once he was hit with that knife, even if there was an operating table in that room, we couldn’t have saved him.

But it takes a long time for someone to bleed out. Scott called for Max and was yelling at Lex, “No! No!” Max ran in and grabbed Lex. And Lex was saying, “Stand back. I’m a trained assassin. I work for the CIA. This man is an impostor. He’s going to kill the family, and I’m here to protect you.”

Max was able to pull Lex away. Finally, they broke a vase over Lex’s head. At that point, Max walked Scott out into the kitchen, laid him down on the floor, and stayed with him until EMS came.

That was all by—I left at 6:20—it was by 7:15 that all this happened. On that beautiful summer evening.

Lex was found not guilty by reason of insanity. By the grace of God, he is now getting help at the North Texas State Hospital, in Vernon. They’re kind to him there.

After the period where I was putting my life back together, the first thing I wanted to do was get involved with NAMI [the National Alliance on Mental Illness]. At the same time, I started working with Texas Gun Sense [a group advocating “commonsense” gun control], because I realized what was necessary was a gun-violence protective order, which could have temporarily taken away Lex’s guns, because he was clearly unstable.

It’s not complicated. People who are in crisis should not be allowed to purchase or own firearms. “Crisis” being the key word. “Crisis” means not in your right mind.

Had we had a gun-violence protective order as a law in Texas, when I called the police and said that my mentally ill son in crisis had guns, they would have interviewed him. If they agreed he shouldn’t have guns, they would have confiscated his guns pending an evaluation by a professional.

And if he’d been diagnosed schizophrenic, and if he’d gone on medication, then he might have been able to get his guns back. But unfortunately, we don’t have that law in Texas.

Lex did not shoot Scott. Let’s be clear. He stabbed Scott. But if he hadn’t been subdued and arrested, if he’d been alone and killed Scott, who knows what he would have done next? He had an arsenal of guns. He’s not going to stay home and watch TV. It’s quite likely he would have taken his guns and hurt innocent people. But thank God he didn’t, and we’ll never know.

One out of five people experiences a mental illness. They take medication. They’re productive members of society. They can go purchase firearms, and it’s fine. But it’s someone like Lex, who’s clearly in crisis, who should not be allowed.

When I sit down and tell my story, I ask, “Do you think that a young man who would murder his dad a month later with a knife should be allowed to own firearms?” I don’t think there’s one person who would say yes. This would be an unmedicated paranoid schizophrenic having delusions going and purchasing firearms. I haven’t met one person at the Texas Capitol who has said yes.

And I hope that this is something that can become a law in Texas. It can save lives. So I’m going to keep going down there, keep telling my story over and over. I can’t not do it. This is a way to take something terrible and use it for a greater good and to help others. It’s what Scott would have wanted. —As told to Dave Mann

The Hunter
2/5
The Gun-Rights Advocate