The Gun-Rights Advocate
4/5
The Chaplain 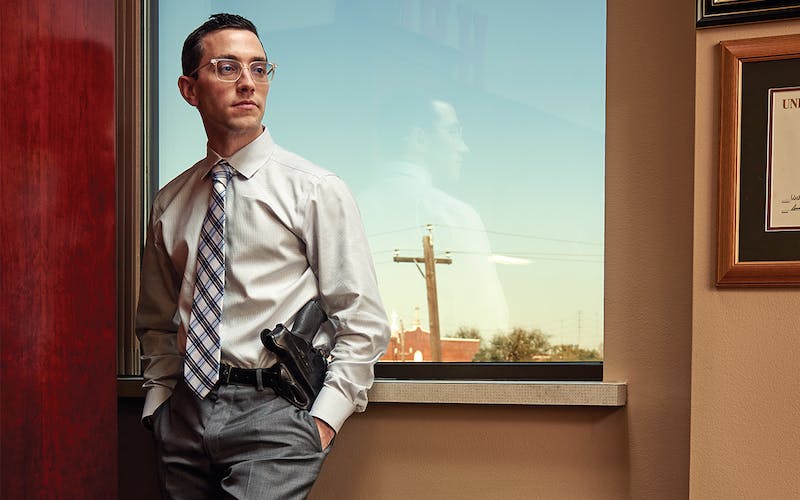 Guns weren’t part of the culture where I grew up, in New York. My father had a gun for protection, but it was never shown to me. Coming down to Houston, the gun culture was a lot different. Most officers here have grown up around guns. People don’t have gun racks on their trucks or anything like that in New York City.

I was hired by the New York City Police Department in 2005, and the academy was the first time I fired or handled a gun. By the end of academy, the gun was no longer a scary unknown. I understood that my gun is my tool. For daily police work, a pistol is for the most part adequate. I chose to carry a Smith & Wesson 9 mm, silver with a black handle. It gave me fifteen rounds in the magazine, one in the chamber, sixteen shots total.

My foot post was in the worst neighborhood in Brooklyn and hearing gunshots was common. On one of my shifts, probably 1:30 or 2 in the morning, I heard five or six gunshots down the block from where I was standing. I saw a man on the opposite sidewalk with a gun in his hand. My first thought was I was going to run and tackle the guy, because I never thought he would lift his gun and shoot at a police officer. It all moved very fast until he pointed his gun at me. Then time slowed. I saw the flashes from his gun, but to this day I have no memory of the sound. I could only focus on his gun. We were about ten feet apart, and he fired two shots at me. I went for my gun. My first shot was from my hip. Then I extended my arm and aimed at him. I fired my second shot. He was running, but I could tell I hit him in the shoulder, because I saw his body turn. He didn’t fall, but the bullet turned him. I chased after him and saw the blood. By that time I had called for backup, and we traced him to a housing project. He was hiding in his friend’s apartment, and we took him into custody.

I had some time off after the shooting. Everybody deals with shootings in a different way, but I didn’t have too much of an issue; I just kind of moved on. But on my first day back, my very first call was a dispute with a man with a gun. My heart was pounding out of my chest. I didn’t want to have to shoot someone again. It ended up being nothing.

I moved to Houston after about three years. I wanted a better quality of life. New York is very expensive, especially on a policeman’s salary. I definitely see more guns here, and most people are carrying legally. Having someone tell me they have a gun in the vehicle during a routine traffic stop is a big change. I haven’t seen anyone open-carrying, but I do get plenty of questions about it from citizens. I think it’s always better to conceal. If you’re in a situation that requires a gun, it’s better to have the element of surprise. From the position of a policeman, open carry could make the officer’s job more difficult. If I’m on a call and there’s a disturbance, I’m going to be paying most attention to the guy with the gun strapped on his hip. But we haven’t had any issues with it. I haven’t seen anyone at the local Starbucks carrying yet. The main thing is that criminals are pretty consistent. New York City had very strict gun laws, and the criminals still had guns.

A few years ago, we had a string of aggravated robberies in my area around Acres Homes, in north Houston. We didn’t know the suspect’s identity, but we knew his vehicle and license plate number. It was a Nissan Xterra, and on one of my shifts, right around three o’clock in the morning, I saw that Xterra. I had to decide whether to trail him and call for backup or pull him over immediately on my own. I was by myself, but I had my gun. If I had been a rookie, maybe I would have tried to follow him and wait for backup, but I didn’t want to lose him. You have to weigh personal safety versus the public safety. This guy had done about a dozen robberies, and he’d shot and killed someone. There was no end in sight. I turned on my lights, and he pulled over. My gun was pulled as soon as I got out of my patrol car. I’m yelling for him to get out of the car. I could see his hands, but he wasn’t stepping out. I approached his vehicle, and I’m yelling at him. My gun is on him the entire time, and he sees my gun pointed at him. Finally he put his hands out of the window. He decided to give himself up instead of shooting it out with me. That incident sticks out in my mind because he had guns in the car and I was able to get him in custody without pulling the trigger. I’m proud of that.

I recently spoke to some high school seniors here in Houston, and a seventeen-year-old kid told me he’s scared that if he’s stopped by police, he’s going to get dragged out and killed. I saw in his eyes he believed it. That broke my heart. No one likes to see officers use force. It’s ugly. But the fact is, evil people are out here. Getting shot at in New York was a learning moment. I was a dumb rookie. It made me realize I can’t be naive about evil people. —As told to Paul Knight

The Gun-Rights Advocate
4/5
The Chaplain