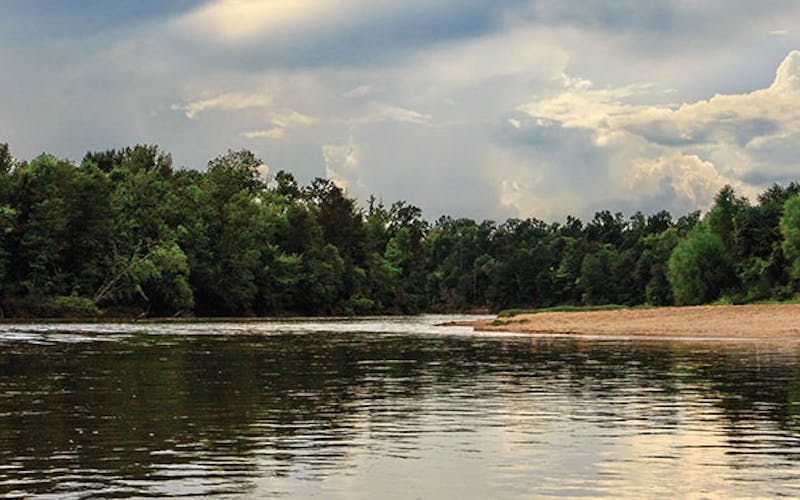 When your guide is a Vietnam veteran who lets it slip that the wooded waterways of East Texas remind him of the missions he led as an elite Army Pathfinder in Southeast Asia, it pays to be ready for anything. If one such waterway is the Neches River, whose banks can be so thick with brush as to appear a solid green mat, it also makes sense to ask what might lurk in the woods.

“Let me tell you, there was a time when you needed to be a warrior to live on this river,” drawled Larry Williams, who along with his dog, Neches (named for the river, yes), was steering our canoe. We were sampling a 10-mile stretch of the 86-mile path the Neches winds through Big Thicket National Preserve, skirting the eastern edge of the 13,300-acre Jack Gore Baygall Unit. Williams was referring to the settlers who migrated here from Appalachia in the nineteenth century, lured by the plentiful timber. I felt the sudden need to keep an eye out for alligators, cottonmouths, and black bears. The Big Thicket is known as “America’s ark” for its biodiversity, and I wasn’t about to be caught off guard.

I soon learned that it’s actually the area’s plant life that gets people most excited—including Williams, who after Vietnam spent ten years studying with a renowned botanist. Some of the last stands of loblolly pine are found here, along with bald cypress, known for its tendency to push “knees” up through the marl. There are also more than twenty types of orchids and four species of carnivorous plants. “If you keep your eyes open,” Williams said, “you’ll always spot something new.” Around us, belted kingfishers hovered over the water, an otter splashed in the distance, and pileated woodpeckers hammered old-growth snags. When we pulled over to camp, three wood ducks—a species Williams hadn’t seen before—sailed down from their roost. And after sundown, the fireflies put on a mind-blowing show that looked more like a fireworks display than the work of tiny insects. “Did you see them?” Williams crowed in the morning. “I’ve never witnessed that before!”

Getting There: Big Thicket National Preserve covers more than 108,000 acres; to get oriented, head first to the visitors center. From Beaumont, travel 30 miles north on U.S. 69/287, past Kountze, and turn off at FM 420; the center will be on your left. (Open 9–5 daily, free. 409-951-6700.) Several local outfitters offer canoe rentals and shuttle services; for information on a guided float on the Neches River with Larry Williams, go to thenechesriverexperience.com.