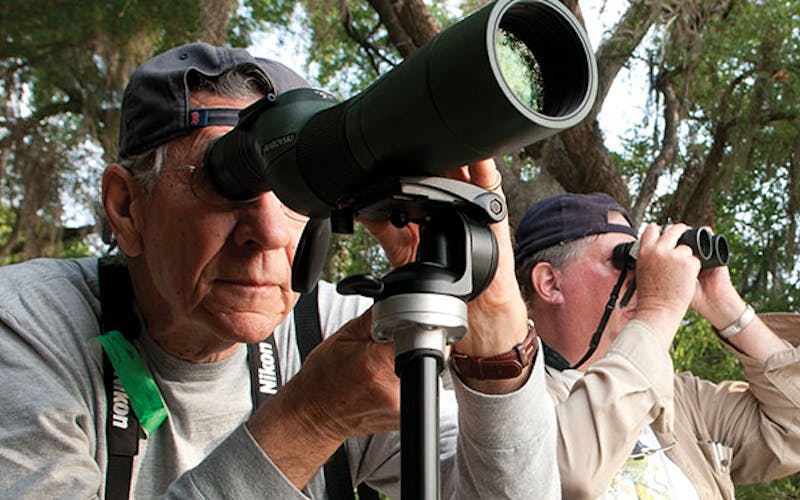 In the lower Rio Grande Valley, where 95 percent of the area’s native habitat has been eroded over the past two centuries by agriculture and development, the 2,088-acre Santa Ana National Wildlife Refuge represents one of the last untamed corners of South Texas. With 450 types of plants, at least 400 bird species, and rare creatures like the endangered ocelot and indigo snake, this subtropical jungle pulses with life. (A note to the anxious: yes, the indigo snake reaches up to eight feet in length, but it is nonvenomous and—bonus—preys on rattlesnakes.) You can venture into this forest along twelve miles of walking trails, as I did recently when I hiked south on the Jaguarundi Trail until the traffic noise from U.S. 281 faded into the background. The air was pungent with vulture droppings as I passed by several dry resacas, looking for the small cat that is the route’s namesake. I didn’t have any luck (no one has seen a jaguarundi around here in a long time), but on the Owl Trail spur I was soon in the company of countless birds—including the ruby-crowned kinglet, common yellowthroat, and white-eyed vireo. I made my way to the refuge’s historic cemetery, which boasts a few wooden crosses and an impressive crypt, to see the final resting place of Cristoval Leal, the son of the area’s original landowner. Thorny, green-barked retama and Rio Grande ash had grown up around the graveyard, a reminder of nature’s recuperative powers in the face of human progress.