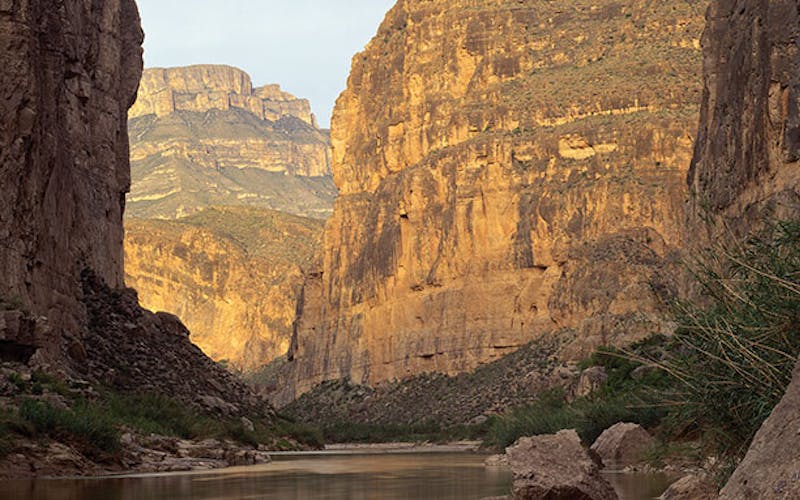 I scratched off the consummate trip on every outdoors-loving Texan’s bucket list—a catered float down Santa Elena Canyon on the Rio Grande—a few years ago, so this spring I returned to Big Bend National Park to tackle the longest and deepest of its canyons, Boquillas. The eighteen-mile chasm runs more than twice the length of Santa Elena, while its waters take you beyond the park’s eastern limit, cutting through the Dead Horse Mountains as they pick up volume.

I decided to forgo the service of a guide, instead inviting a friend who knows me well enough to check the Internet before trusting me with logistics. We agreed on a three- day, 33-mile float to the take-out at La Linda, an old mining bridge that once served as a border crossing, and launched our canoe at the park’s RV-friendly Rio Grande Village. Suspended sediment had turned the water into a beige, chocolate-swirled gruel, but as occasional carp slapped the surface and cliff swallows dived and darted from their nests, I felt myself gradually pulled in, much like the elephant who went looking in the “great grey-green, greasy Limpopo River” in Rudyard Kipling’s Just So Stories.

As the day wore on, we came upon landmarks such as the towering Lizard Rock and the Rabbit Ears formation, as well as other strange, unnamed monuments. Overhead, golden eagles harassed turkey vultures, and just past the park’s boundary, we began to hear feral burros, their brays bouncing off the rocks. That night, after paddling about ten miles, we camped on one of the sand beaches near a nameless side canyon and listened as their exotic serenade continued. It was hard to sleep, but with the glowing Milky Way above us, we didn’t feel like closing our eyes anyway.

Our only real challenge took place the following evening, after our second day in triple-digit heat, when a killer desert wind struck up during dinner prep. We’d set up on a well-used bank—Mexican vaqueros, or perhaps smugglers, had left a fire pit and a few flattened beer cans—when gusts of more than 40 miles per hour roared around us, mashing our tent and scattering our supplies. The wind silenced the burros—though only for a little while. Sipping gritty coffee the next morning, I heard their braying again, and it sounded like laughter. Another Just So story in the making.