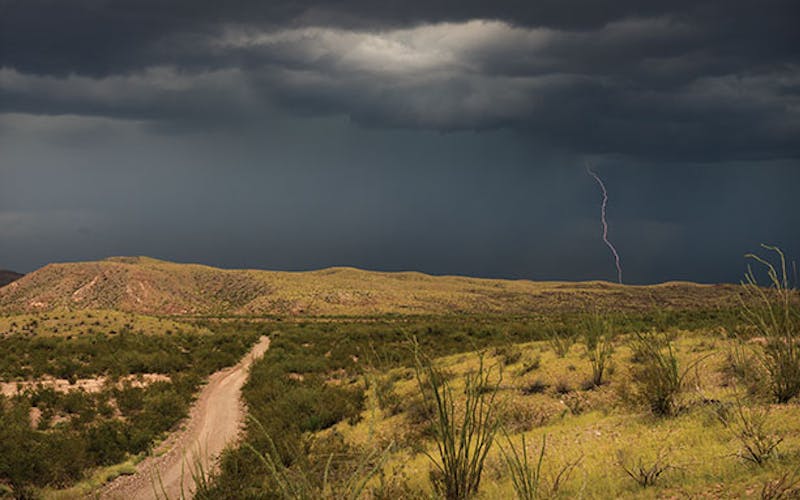 The aoudad ewe poked her head above the thorny mesquite and waving ocotillo, watching as I plodded up toward the ruins of Mariscal Mine. Then the shaggy-bearded goat, a sandy-brown species native to the mountains of North Africa, ducked out of sight. I felt the impulse to double-check where I was. Big Bend National Park, with its desolate tawny mountains and surprising wildlife, can be disorienting like that.

I was still just a short hike from my SUV—phew. A day earlier, I had set out to explore River Road, an unpaved route of almost 51 miles that cuts across the park’s remote southern backcountry. The rugged non-highway roughly parallels the Rio Grande, crisscrossing creosote-dotted washes, ashy deposits, and ancient lava flows, and it is not without its dangers, as the park ranger repeatedly warned me: a road explorer may encounter wild animals, flash floods, and even horseback-riding ladrones from across the border, who have recently been divesting unattended vehicles of camping gear and electronics. And with spotty cell service throughout the park, it’s not like help is readily available. Since I was driving alone, the ranger admonished, I was not to stray far from my vehicle.

Of course, this made the odyssey all the more irresistible. From one end to the other, the drive takes a full day, but after assessing the perils—it hadn’t rained in weeks, and the thieves appear to avoid personal contact—I decided to stretch my journey out over three days, driving, stopping to explore when the whim struck, and camping at the primitive gravel sites along the way.

I did secretly hope to spot a mountain lion—though, if I was being honest, preferably from the safety of my car. Then again, watching the world from behind my windshield was not the experience I had already driven ten hours from Houston for, so about twenty miles in, I ventured to what’s left of Mariscal Mine, a picturesque if eerie collection of ruins that sits amid a series of ravines. Beginning in the early 1900’s, the mine’s workers smelted the reddish cinnabar ore that stains the base of Mariscal Mountain, producing 42 tons of mercury over four decades. They helped fuel munitions manufacturing for the U.S. military, but near the end of World War II, the American quicksilver industry collapsed, and so did the mine’s operations. These days, the mine shafts exhale a strong scent of guano thanks to Townsend’s big-eared bats and other species that have colonized the tunnels. As I walked among the rusted husks of long-dead cars, crumbling adobe structures, and gated mine shafts, I couldn’t help but think of the colossal wreck in Percy Bysshe Shelley’s poem “Ozymandias.”

I doubled back that night to Solis Camp, and the next day I motored along for another several hours, enjoying unobstructed views of Mexico’s mighty mountains, taking a few detours, and gaining a fresh perspective on the Chisos range, which loomed like a cluster of friendly giants to the north. Eventually, I crossed paths with a retired couple who were traveling in an elaborate school-bus-cum-RV that seemed built for the Apocalypse; seasoned off-roaders, they clued me in to the hiking trails along Black Gap Road, away from the river. I took their advice and made another short day hike, tracking jackrabbits and roadrunners amid the desert scrub, delighted by the subtle and small flowers that seemed to be in bloom wherever I looked. That night, at Loop Camp—along the road’s western end, just above the banks of the Rio Grande—I unzipped my tent panel and counted the constellations.

I never saw a mountain lion. But on my last leg the following day, I thought of the aoudad and how quickly it had vanished before my eyes, eager to stay out of sight. I felt a strange kinship, initially wanting to keep my journey entirely to myself. My phone’s silence had been blissful. Facebook seemed a distant memory. I got out of the car and looked back on the road, a dirt ribbon skirting the swales of creosote and ocotillo and crossing the sandy floodplain before making an abrupt drop. Disappearing into the desert never felt so appealing.

Getting There: From Fort Stockton, travel 126 miles south on U.S. 385, through Marathon, until you reach Big Bend National Park headquarters. (Open 9–5 daily, $20 per vehicle. 432-477-2251.) Take a left and continue for 20 miles to Rio Grande Village, where you’ll find the eastern end of River Road. You will need a $10 backcountry permit if you plan to camp. Do not attempt this drive without a high-clearance vehicle.