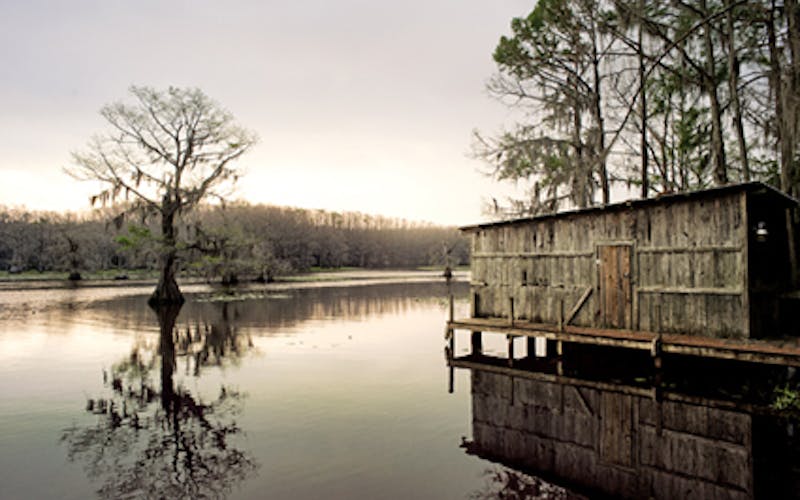 DISTANCE: 140 miles
NUMBER OF COUNTIES: 6
WHAT TO LISTEN TO: Jim Reeves’s  “Welcome to My World”

If you want to see, smell, and taste the Deep South, look no further than East Texas. Start your drive in Uncertain, but before you even get behind the wheel, take a short walk onto a narrow pier near Shady Glade Cafe over Caddo Lake, the only natural lake in the state. Out of the still and quiet waters, the tall cypress trees grow, their limbs weighted with long strings of gray moss. Ducks glide in twos and threes past old boathouses faded in the morning sun. Below the murky water swim bass, catfish, and, without a doubt, alligators.

Climb behind the wheel and leave Uncertain behind, driving past B&Bs and signs for steamboat rides and boat tours. After making a right onto FM 2198 and another onto 2412, you’ll hit the Big Pines Lodge Restaurant and Waterin’ Hole. The restaurant, one of the more famous in the area, burned to the ground in 2009 but was rebuilt last year. It serves catfish and long, thin hush puppies that look like funnel cakes. At night, locals and tourists fill the picnic tables on the porch, drinking beer and staring out over the Big Cypress Bayou.

From here, get back on FM 2198 and make a left on Old Texas Highway 134, which soon becomes the new Highway 134 through Karnack, the tiny hometown of Lady Bird Johnson. Cruise down the two-lane blacktop through forests that open up into pristine fields and meadows dotted with herds of horses, cattle, and donkeys. South of Jonesville, the road winds through a gorgeous stretch where the trees fold overhead, creating an umbrella of shade.

Cross Interstate 20 and head south on Texas Highway 9, then make a right onto U.S. 79 and go over the wide Sabine River. Just north of Carthage, stop at the memorial to Jim Reeves, the country star who was born in nearby Galloway and died in a plane crash in 1964. The monument feels like something you’d see in Hollywood, with perfectly sculpted hedges, a giant guitar engraved in the sidewalk, and a statue of Gentleman Jim on a six-foot pedestal. Soon you will be deep in the Pine Curtain, with a thick canopy of trees and miles of lush forests bracketing the road. Turn south on U.S. 59, which merges with U.S. 96, and after half an hour, you’ll arrive in San Augustine, a settlement that has been around longer than Texas itself. Stop at J&D’s Little Cafe, a small trailer at the intersection of Texas Highway 21 and Loop 547, for a bag of spicy crawfish and potatoes. But don’t eat too much. There’s catfish ahead.

South of San Augustine, armies of pines stand guard, then a field of saplings. You will not be surprised to pass through a town called Pineland before finally arriving in Jasper. Just inside the city limits, pull into the Catfish Cabin. Order the Catfish Acadiana, a delicious fried filet covered in creamy étouffée. The hush puppies are sweet, almost like beignets. Then saunter next door to a wildlife sanctuary called Gator Country run by Gary Saurage, star of the CMT show Gator 911. After donating $3, wander out onto the wooden walkway that bisects a large fenced pond and behold nine gators dozing in the sun. Peanut, Chomper, and Ugly Betty are all nice enough, says their caretaker. The one you need to be careful with is One-Eyed Willy, who has been known to take a bite out of his brothers and sisters. As you ponder the mysteries of East Texas, keep in mind that Parks and Wildlife claims that no one in the state has ever been eaten by a gator. If Willy winks at you, he’s probably just being friendly.