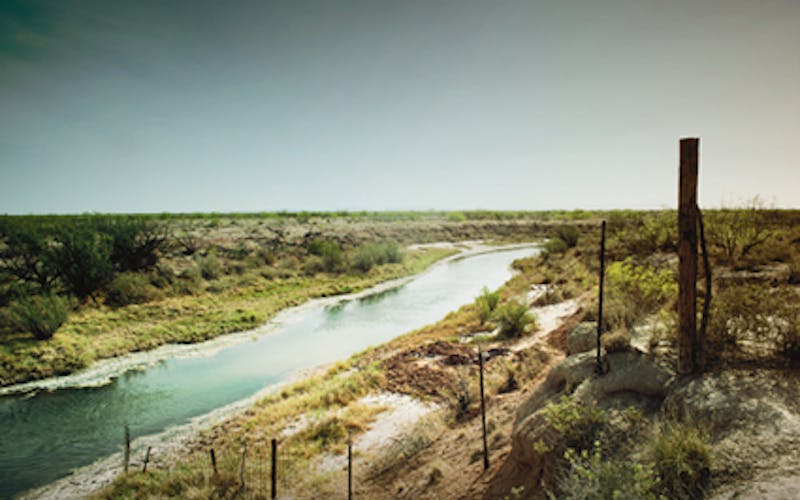 In the rolling country northwest of the Palo Pinto Mountains, nestled along FM 61, stand the barracks of Fort Belknap. It was from this outpost, in 1860, that a hastily assembled group of soldiers, including a young scout named Charles Goodnight, set out to punish Comanche raiders. In the ensuing Battle of Pease River, Goodnight would help recapture Cynthia Ann Parker, the most famous captive in Texas history. Explore the restored powder magazine and a small museum that features a fascinating collection of antique pistols and long rifles. Then head north on FM 61 before turning west on U.S. 380.

In less than three miles you will cross the Brazos River, where, in 1866, Goodnight assembled a mixed herd of two thousand cattle with his partner, Oliver Loving. In one of the first major drives after the Civil War, they planned to move their livestock across the open range to Fort Sumner, in the New Mexico Territory, nearly four hundred miles to the west. Goodnight, however, dared not take the direct path, which led straight through Comancheria. Instead, he would swing southwest along the abandoned Butterfield Overland Mail route.

To retrace his approximate path, continue west to Throckmorton. The landscape features dramatic views to the south studded with nopalito and cattle, which graze safely behind their fences. Turn south on U.S. 283, which runs near the site of the old Camp Cooper, where Robert E. Lee assumed his first command. Goodnight would have crossed the highway just north of FM 209. Continue south to Albany, then west on U.S. 180, where the land flattens out. Turning south on FM 600, you stumble upon the ruins of Fort Phantom Hill, which were already a ghostly sight when Goodnight saw them. Push south through Abilene on FM 89 toward Buffalo Gap, where the drama returns to the landscape. This is the Callahan Divide, a beautiful range of hills that divides the Brazos and Colorado river basins. Continue south on U.S. 277, where Brangus gather at the base of enormous turbines that make up Horse Hollow wind farm.

The highway leads past Fort Chadbourne, another stop along the Butterfield, as peaks such as Hylton Mountain punctuate the scenery. Soon San Angelo comes into view. Goodnight stopped here to water his cattle along the Middle Concho River before cutting west across the open desert. Follow U.S. 67 west out of town, but take a slight diversion on FM 2469, which offers astounding views of the Concho Valley. From this vantage point, West Texas unfolds below you.

Return to U.S. 67 heading west, and the desert begins to swallow you. Goodnight and the herd headed toward Castle Gap, a broad canyon north of McCamey that pointed the way to the Pecos River. Follow 67 to FM 11, in Girvin, and drive north for eleven miles. There you will turn right on a county road that leads to Horsehead Crossing, on the Pecos, a historic site that had been used by the Comanche long before an Anglo ever dreamed of pushing cattle through the desert. Standing among the scrub and ocotillo, you can kneel on the bank where Goodnight’s cattle arrived after a mad dash for water.

Here Goodnight turned the herd north toward New Mexico. Return to FM 11, then follow FM 1053 southeast for a short way before heading northwest on FM 1450 into Pecos. Continue north along U.S. 285 toward the state line for roughly 32 miles before turning off to Red Bluff Reservoir. In Goodnight’s day, this was the location of Pope’s Crossing, where the trail drivers forded the river to avoid the Apache on the opposite side. Though Fort Sumner is still more than two hundred miles away, don’t fret. Just imagine what a cowboy would have traded to get out of his saddle and into your air-conditioned car.