The  Wildflower  Drive
5/16
The Canyon Drive 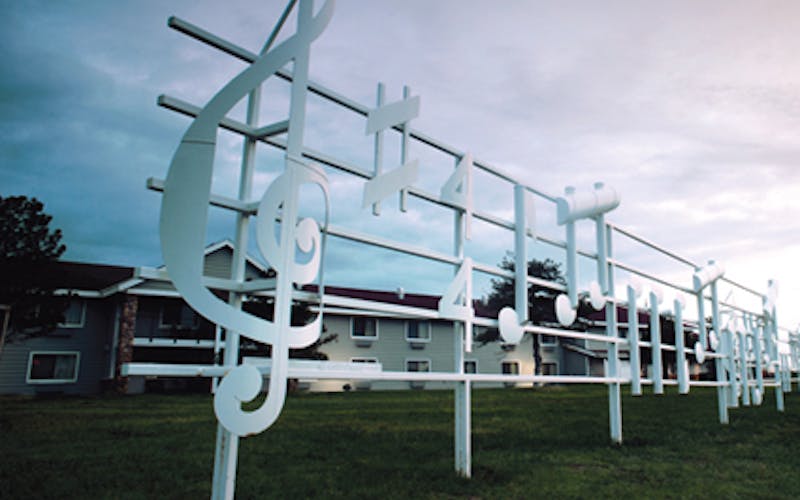 DISTANCE: 366 miles
NUMBER OF COUNTIES: 13
WHAT TO LISTEN TO: Buddy Holly’s That’ll Be the Day and  Waylon Jennings’s Ol’ Waylon

West Texas is the Texas of wide-open spaces, but it is also the Texas of music giants, starting in the Rolling Plains in the heart of red-dirt ranching country, not far from the 6666 and the Matador. The landscape is sparsely populated and visually powerful, and the sky is so big that only the most creative imagination can fill up the canvas. That was the case with James Robert Wills, who came from a farming family near Turkey and went on to become the King of Western Swing. That point is driven home at the Bob Wills Museum at the old Turkey grade school, where his life is recounted in phases through storyboards, photographs, and album covers.

Heading north from Turkey, drive 88 miles on Texas Highway 70 to Pampa, crossing undulating grasslands and passing over eastern extensions of Palo Duro Canyon. In downtown Pampa the old Harris Drug Store, where Woody Guthrie worked as a teenager and first learned guitar, is now the Woody Guthrie Folk Music Center. Guthrie’s story is told through photographs, letters, and news clips, and his legacy as the greatest folk singer in American history is celebrated with live jams twice a month. In July the center will celebrate Woody’s one hundredth birthday. About a mile west is the 150-foot-long “This Land Is Your Land” music-note fence.

From Pampa, it’s 55 miles to Amarillo on U.S. 60, then 18 miles south on Interstate 27 to Canyon. Though the Panhandle-Plains Historical Museum does not yet have  a permanent exhibit on  West Texas music (hint, hint), if you call in advance, you can arrange to see Bob Wills’s fiddle.

Now you have entered the pancake-flat Llano Estacado, where windmills and grain elevators dominate the horizon. It’s a straight shot for 88 miles on U.S. 60 to Clovis, New Mexico, home of Norman Petty Recording Studios. Kenneth Broad and his wife, Shirley, lead tours of the studio where Buddy Holly and the Crickets, Buddy Knox and the Rhythm Orchids, and a slew of other bands recorded hits in the late fifties and early sixties. If you get the fever, pick up some taquitos and burgers from the Foxy Drive-In, like Buddy and the boys used to do, and stroll through the new Norman and Vi Petty Rock and Roll Museum, with floor-to-ceiling exhibits filled with artifacts from the Pettys and the Texas musicians they worked with.

Pick up U.S. 84 heading southeast, and you’ll pass a string of farming communities and a billboard that identifies Littlefield as the home of Waylon Jennings. Follow Waylon Jennings Boulevard (FM 54) into town to Hall Avenue, where you’ll find the most unusual music museum in West Texas, inside Waymore’s Liquor Store. Run by members of Waylon’s family, it features his first guitar, his handwritten backstage pass for his parents, and assorted memorabilia. But the best  part of the collection is James Jennings, who will gladly tell you vivid stories that bring his older sibling back to life.

Continue on U.S. 84 for 36 more miles until you roll into Lubbock, the home of Buddy Holly and the Crickets (and the terrific Buddy Holly Center). Head east to 108 E. Broadway to see a statue of C. B. Stubblefield, which marks the spot of his original barbecue joint, where Joe Ely and Jimmie Dale Gilmore polished their musical chops. Then turn right on Martin Luther King Jr. Boulevard and left on E. Thirty-first, where you’ll find the City of Lubbock Cemetery. Holly’s gravesite is plainly marked, and tradition calls for you to leave a guitar pick on his headstone. Don’t let tradition down.

The  Wildflower  Drive
5/16
The Canyon Drive