How Ito Romo turned the border into his canvas. 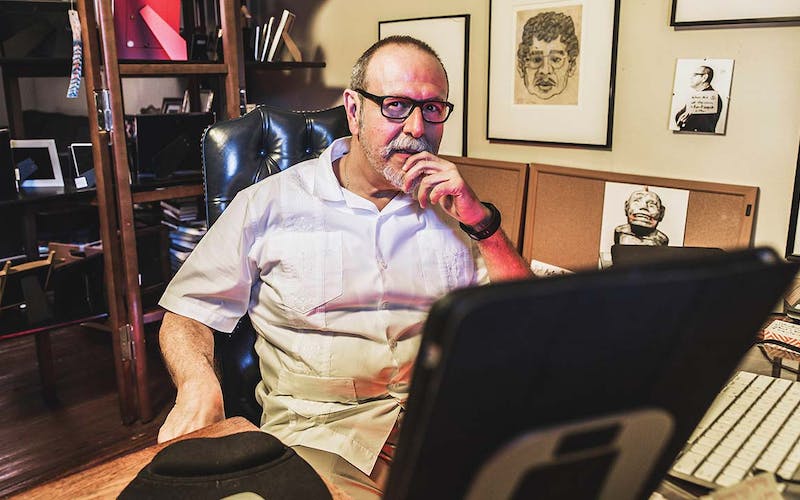 Atop the dining room table in Ito Romo’s bungalow in central San Antonio, there’s a handcrafted skull in a vitrine, meticulously bedecked with shiny black beans. Nearby, in another glass case, a miniature highway scene captures the moment when an eighteen-wheeler’s trailer door opens to reveal a pile of lifeless bodies. They’re reminders that long before Romo became a writer, he was an artist who drew and painted and made hauntingly autochthonous sculptures such as these.

Yet words always captivated Romo, who majored in English as an undergraduate at San Antonio’s St. Mary’s University. “I loved literature,” the 54-year-old Laredo native says. “But I never wrote creatively.” Instead, he spent much of the eighties as part of a group that birthed the vibrant art scene that continues to energize San Antonio. Still, he always felt an affinity between his work and literature, which he had never stopped reading and thinking about. “In my art, I was telling stories visually,” he says.

After moving to New York City in the late nineties, Romo began to feel a compulsion to write. “I felt an explosion of pent-up words and images and emotions, some bright and beautiful, others dark—and beautiful too,” he says. “I found another kind of brush I didn’t know I had: my pen.”

Romo’s first collection of stories, 2000’s El Puente/The Bridge, established him as a writer with a knack for evoking the mythic inner dramas of borderlands people. The book is terse and austere in its language, but there’s a sense of the fantastic about Romo’s story cycle; the Rio Grande itself appears as a character in many of the linked tales, and even turns blood red.

For all its daring, El Puente is full of subjects that flirt with Latino literary cliché: endearing old ladies and dying echoes of the folkloric. “That book’s like a fairy tale,” he explains. “It still has hope, and it’s a little whimsical.” Soon after its publication, though, Romo felt an urge to transform his work once again. “I wanted to kill the abuelita,” he says. “I wanted to kill the tortilla stories. I wanted to say, ‘All right, so Hispanic writers have had to pay their dues, have had to write the way others wanted us to write for such a long time. I’m not going to do that.’ ”

The apocalyptic foreboding of El Puente, which was soon borne out by the wave of narco-violence that overtook the region, comes into full flower in 2013’s story collection, The Border Is Burning. Thirteen years after his first book, Romo’s stories grew darker. Car crashes, houses on fire, furtive sexual trysts, tweaking crank heads trying to maintain control—this suite of Romo cuentitos evokes a world in which chaos is rampant, and the gyre of events is ever-widening, threatening to explode. Yet these stark vignettes nonetheless show great compassion for people who Romo says are usually dismissed as “villains, lepers, and murderers.”

For a man who deals with such bleak material, Romo describes his ambitions in surprisingly sanguine terms: “I just hope I can produce work that in one way or another, be it dark or be it light, speaks to respect, dignity, hope, peace, and love.”

Romo’s Next Book: A “mestizo vampire novel” that begins in Granada in the eighteenth century, moves through Mexico, and ends in New York City in 2043.