The varied pursuits of the man behind 2014’s Red Now and Laters. 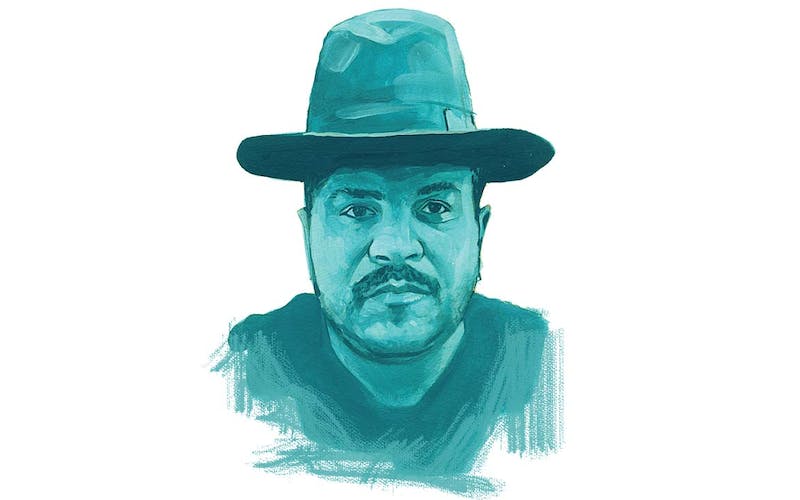 Ti’ John, the protagonist of Marcus J. Guillory’s 2014 debut novel, Red Now and Laters, is, as Guillory acknowledges, a thinly veiled version of himself. Like Ti’ John, Guillory grew up in Houston’s South Park neighborhood, the son of Louisiana Creoles who moved to Texas for economic opportunity. And like Ti’ John, Guillory saw a lot of violence as a young man. But though Ti’ John’s story ends just as he heads off for the University of Pennsylvania, Guillory’s life got even more interesting after he left Houston. Following his college graduation, Guillory attended law school, wrote screenplays, and worked on Snoop Dogg’s “reality sitcom.” Today the 42-year-old writer splits his time between Seattle and L.A. Here’s what he’s been up to lately.

“In the rural South, a lot of people go to these get-rich-quick seminars. This screenplay, a character study of four people from Kerrville who go to one, asks what happens when you put hope in people’s lives. I picked Kerrville because I got a ticket there in 1999. I was an entertainment lawyer in L.A., and the firm had just gotten me a brand-new Mercedes, and I wanted to go back home and show it off, because nobody in my family had ever had a European vehicle. So I’m on I-10, going 103 miles per hour—I had it coming—and this Kerr­ville officer, a big ol’ guy with a big ol’ red nose, pulls me over and gives me a ticket. On the trip back, I stopped at the Dairy Queen in Kerrville and just listened to people talking. So when I was thinking about this screenplay, I thought, ‘Let’s do Kerrville—it’s got some character, it’s got some history.’ ”

“This is a screenplay that follows the path of a young Houston rapper who blows up, but he has a secret: he’s illiterate. And then he loses his voice, and all of a sudden he has to learn how to read and write so he can show his lyrics to people. At some point I’m gonna get that made. Might be a good time now, given how Straight Outta Compton is doing.”

“I’ve always played music, and a few years ago I started getting into electronic music. Then I met the L.A. radio DJ Garth Trinidad, and I asked him if he’d be interested in reciting my prose over dance music I’d composed. I took a pseudonym—“Mateo Senolia”—and we became Trinidad-​Senolia. In 2012 we got a record deal with the house-music label Yoruba Records, and our first EP included Trinidad reciting a passage from Red Now and Laters. It was a huge hit in the Afro house scene around the world, and people started really getting into the lyrics. I got an email from a young South African who wrote down what he thought the lyrics were but wanted to check them. I was floored! This was exactly what I’d set out to do: turn listeners into readers.”

“I’m working as a counselor at a group home for incarcerated teens in Seattle. I teach them life skills, chaperone them, cook them breakfast every morning. They remind me of some of the kids I grew up with. Sometimes you try to figure out why kids are incarcerated, and 80 percent of the time I think maybe it’s because they’re hanging out with the wrong kids. But then you meet the parents and you really start to understand. Some of these parents should be locked up.”

The Unexpected Entry on the CV: Guillory is, apparently, the first American to ever write a produced screenplay for a Bollywood movie, 2009’s Karma, Confessions and Holi.