The Love Me Back author is ready for her nap. 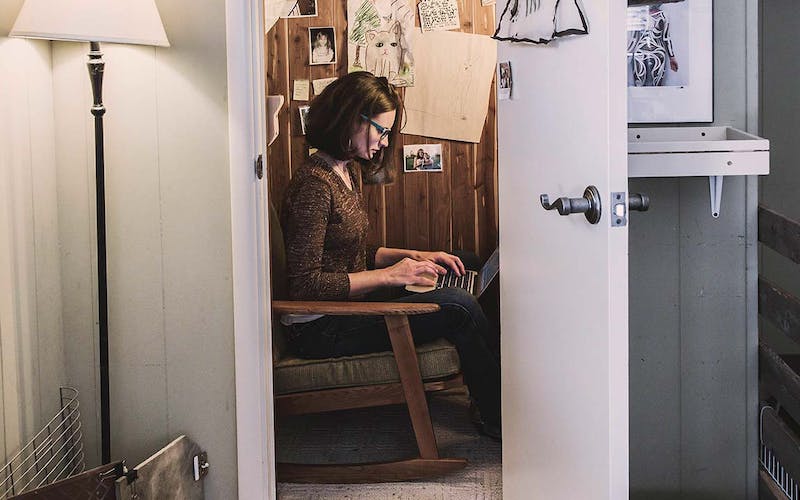 Merritt Tierce in her writing room, a converted closet in her Denton home.
Photograph by LeAnn Mueller

One night in Dallas in March 2006, Merritt Tierce, an emotionally fragile, divorced young mother of two children, got into an argument with a former lover. Alone in her apartment, she burst into tears. Nearly overwhelmed with despair, she put a hot iron to her thighs. Then she drove to a coffee shop and opened her laptop.

Like a lot of people, Tierce had always wanted to be a writer, but she had never written anything except some college papers. That night, however, she decided to write a short story set in a fictionalized restaurant that was not unlike Nick and Sam’s, the high-end Dallas steakhouse where she was then working as a waitress. Among her characters were Sal and Danny, the restaurant’s owners, and customers ranging from sports stars to big-spending businessmen.

Mostly, however, Tierce wrote about a 21-year-old waitress named Marie, an emotionally fragile, divorced young mother who tried to deal with the pain in her life by cutting herself and self-medicating with drugs and constant sex with more than thirty men in the space of three months. “It wasn’t about pleasure,” Tierce wrote of Marie’s often brutal sexual encounters. “It was about how some kinds of pain make fine antidotes to others.”

When I recently met Tierce at a quiet restaurant in Denton, where she now lives, she didn’t strike me as the self-destructive type. Dressed in strappy white shoes and a sleeveless yellow dress, with her pretty, angular face framed by chunky glasses, the 36-year-old cheerfully told stories about her new husband, her teenage children, and her passion for gardening. “People look at me and say, ‘You’re the one who wrote that book about the waitress,’ ” she said, “and I reply, ‘Yeah, sometimes I have trouble believing it myself.’ ”

In fact, when she finished writing at the coffee shop, she had no expectation that her story, titled “Suck It,” would ever be published. “I assumed it wasn’t good enough,” she said. But she worked up the courage to show it to the Dallas writer Ben Fountain, whom she had met through a friend. At the time, Fountain was busy: his first book was about to be published, and he was working as the fiction editor of SMU’s literary journal, the Southwest Review. But he agreed to look at her story. “I found myself reading ‘Suck It’ every other day for two weeks, trying to figure out if it was really as good as I thought it was,” Fountain said. “And it was more than good. Her writing was totally unsentimental, at times outrageously hilarious, and at other times absolutely terrifying.”

Tierce had always been fiercely intelligent. In 1997, when she graduated from high school in Denton, she was named a National Merit scholar, which essentially meant she could attend any university she wanted. But because she was a devout Christian, she eventually chose Abilene Christian University. In her senior year of college, she was accepted into the Yale Divinity School. Then she discovered she was pregnant. “I had just written a paper for class affirming the biblical views against abortion,” she said. “There was no question I would have the baby—which in my family meant there was no question the baby’s father and I would have to get married.”

They returned to Denton, where Tierce worked as a secretary while her husband finished his undergraduate degree. She gave birth to their son in 2000, had a daughter a year later, and took a job waitressing at Chili’s. “We were poor, on food stamps and Medicaid,” she said. “And I was so miserable. I didn’t know what had happened to my life.”

Tierce began spiraling into depression. She cut and burned herself, split up with her husband, and briefly went into treatment. She kept waitressing, and in 2005 she was hired at Nick and Sam’s. The managers loved her: cool and imperturbable, she was assigned to wait on visiting celebrities like George Clooney, Mark Wahlberg, and Derek Jeter. Rush Limbaugh gave her a $2,000 tip—twice. “I was able to put on a good performance, playing the smart girl, making clever conversation with the customers,” she said. None of them had any idea that when her shift was over, she would do whatever she could to numb her self-loathing.

Fountain’s encouragement helped Tierce get her life back together. He published “Suck It” in the Southwest Review in 2007, and soon after, Tierce was accepted into the Iowa Writers’ Workshop, where she wrote more stories about Marie. Periodically, needing to bolster her income, she would return to Dallas to wait tables at Nick and Sam’s. After she left Iowa, in 2011, she went to work for a few years as the executive director of a Texas abortion-rights organization. She also got an agent, who told her she had enough material for a book. The prospect of having the book published worried her; she knew that people would regard it as a thinly disguised memoir. “But it was important to me to tell the truth, no matter how ugly,” she said.

In 2014 Doubleday published Love Me Back to high praise. The New York Times called it “a brilliant, devastating debut.” The attention from reviewers was heartening, but Tierce said that what makes her most proud is that “people who work in the service industry would come up to me and say, ‘You did it. This is my life. You nailed it.’ ”

And then there’s the response among Dallas’s well-heeled set, who have treated her book as a rich source of gossip, trying to match various characters with their real-life counterparts. “Who is the basketball player that the waitress had sex with?” they wonder. “Which church pastor won’t allow waiters to speak directly to him?”

One thing that has impressed many readers is that Tierce didn’t come up with a sugarcoated ending. Toward the end of the book, when Marie is asked about her philosophy of life, she says, “Don’t bitch. Just adapt. Nothing is going to go right and everything is going to be hard.”

The irony is that things are now going right for Tierce, who spends much of her time with her new husband, her two children, her stepdaughter, and their six pets. As far as she knows, her kids haven’t yet read the book, nor do they seem interested in doing so. “They see me as a boring and happy mom, which is the truth,” she said. “Today, I actually took two naps.”

Tierce did say that she’s worried about one thing: what to write next. She’s got an idea for a trilogy of novels—“which, knowing me, will take a decade to write, and I need to publish something soon, because we’ve got bills to pay and college tuitions coming up.” But she admits she doesn’t have another searing personal story to tell about herself—“absolutely nothing,” she said.

I asked her if she would ever go back to work at Nick and Sam’s, even part-time, to make some extra money. Tierce threw back her head and laughed. “No. All caps, NO,” she said. “It was a scene, a great Dallas scene, I’ll grant you that, but it was never my scene. I now like the quiet.”

What Tierce Told the PEN American Center When It Asked Her for Five Words of Advice for Aspiring Novelists and Short-Story Writers: “Read write read write read.”