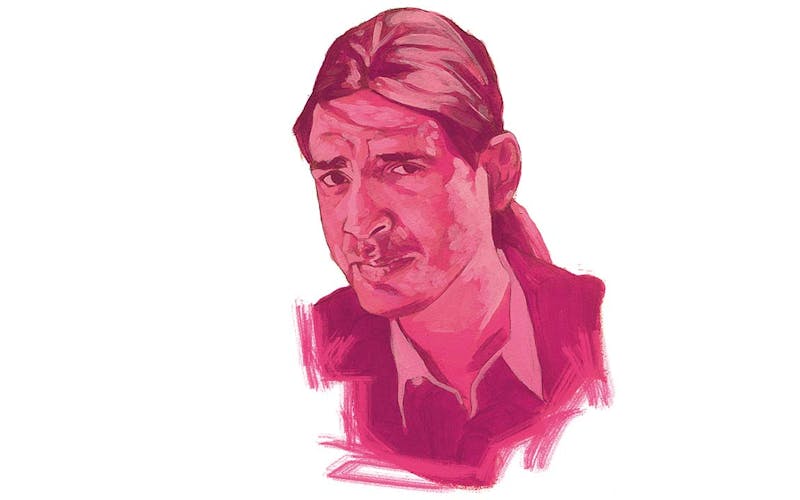 My uncle Randall always had a book in his hand. He read in the car, he read at restaurants, he read when you were talking to him. He read lots of different things, but mostly it was Louis L’Amour’s westerns and contemporary thrillers. When I was twelve, Uncle Randall looked up long enough to see that I was a reader as well, so he walked me down his hall to a linen-closet door and opened it up onto a wall of paperbacks. There were books behind books, as deep in as I could reach. He told me to take three, and when I was done, bring them back and take three more.

This was before I discovered that Midland, the closest big town, had used bookstores and public libraries. (My hometown, Greenwood, had pretty much nothing.) Without my uncle letting me burn through his stash, I don’t think I would be a writer today. I might not have even made it past seventeen, and definitely never would have made it to Texas Tech. That was where writing found me.

I was sitting in class one day when two police officers showed up to take me to the university hospital. Uncle Randall had been airlifted to the burn center there after an accident, and I was the only family they could locate. Sitting in the waiting room for three days, with only a pen and a spiral notebook, I wrote my first story, about a girl in a coma who receives a visit from her dead boyfriend. When I got back to school, I turned it in and won an award for it, and my adviser said I should consider adding English to my philosophy major, which I quickly did.

As for Uncle Randall, he’s doing great now. His paperback collection isn’t around anymore, but those books are still in my head, and my heart, and my pen. Here are four that have stayed with me all these years.

To Tame a Land, Louis L’Amour

So I’m this Blackfeet kid—only Indian kid in my school, my county, my everywhere—reading pulp cowboy novels with titles like this. Like the land needed “taming.” But at twelve? This was gospel. This was history. And this novel was one that my uncle and I traded back and forth, read over and over. What fascinated me about it was that the hero was always pulling Plutarch from his saddlebag and hunkering down behind a boulder to read. Oh, I thought, cool people read. And ancient Greek stuff, at that. Six years after the first time I opened To Tame a Land, I was a philosophy major.

Yep, Robert Jordan, not Robert E. Howard, who was actually from Texas. Howard may have created Conan, but Jordan, later famous for his Wheel of Time fantasy series, wrote a bunch of Conan novels in the eighties. And that was the Conan—the Invincible, the Defender, the Unconquered—that I found in that closet. To me, Conan was Indian through and through: he used whatever tactics would help him win the fight, and he always barely got out with his skin intact.

There were dozens of books about the exploits of Mack Bolan, an Army vet turned Mafia antagonist, and I read exactly one of them. Bolan didn’t do it for me; I couldn’t squint enough to see Mack Bolan as an Indian. But out of respect for Uncle Randall, I always took one Bolan book, which I’d then return as if I’d read it, saying I was ready for more of that brand of adventure. And that wasn’t necessarily a lie; I burned through the many John D. MacDonald and Ian Fleming novels in my uncle’s collection. But Mack Bolan, he was my pretend friend. I “read” him so I could keep reading through that shelf.

I wouldn’t get to Philip K. Dick, Samuel Delany, and Ursula K. Le Guin for a decade yet, so Clarke was the one who took me to space. Rama is the only science fiction I remember from my uncle’s closet; it may have been there by accident. I don’t remember much about what actually happens in Rama, but I distinctly remember the experience of reading it, how my face went slack with wonder, numb with delight. This world Clarke was showing me, I wanted to go there, now. I still do.