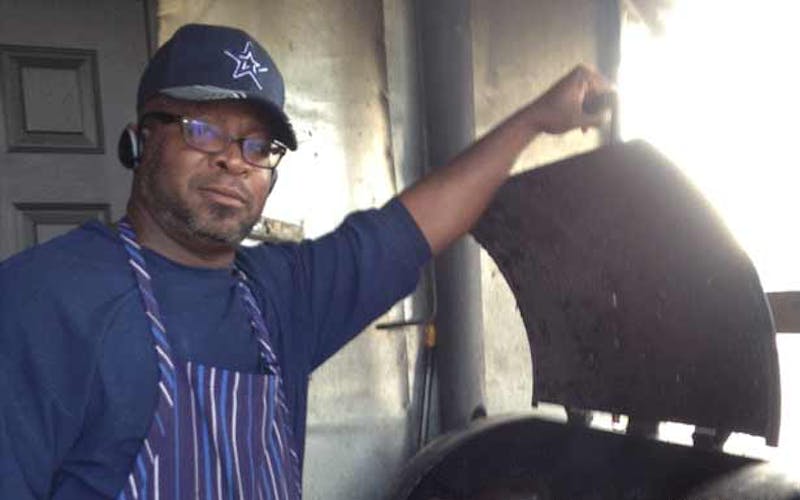 Trent Brooks was working as a materials specialist for a gas-compression company when a supervisor, who knew of Brooks’s talent as a part-time pitmaster, referred him to an ad on Craigslist for a $12,000 mobile smoker. Brooks negotiated the price down to $4,500, and the rest, as they say, is Houston barbecue history. Brooks quit his day job and set up his smoker in an Ace Hardware parking lot in the nether regions of Cypress, a bustling bedroom community northwest of Houston. This was not, however, a plunge into a completely new world for him. Brooks learned the art of smoked meat from his father, who still has a barbecue catering business in the Acres Homes neighborhood of Houston, a hotbed of shade-tree barbecue operations and classic East Texas–style ’cue. Brooks’s own style borrows from the Southern tradition of pork-centric barbecue, but he combines it with a mastery of smoked beef that is usually limited to Central Texas. In time, even the most skeptical of Houston ’cue hounds were making regular trips to Cypress to taste Brooks’s brisket. It’s minimally trimmed—an anomaly in Houston barbecue, where “fat” is a four-letter word—resulting in moist, perfectly rendered meat with a crusty, jiggly fat cap still attached. Ribs and sausage are top-notch too. Kicked-up baked beans redolent of oregano and simple, fresh-made garlic potatoes round out the menu.