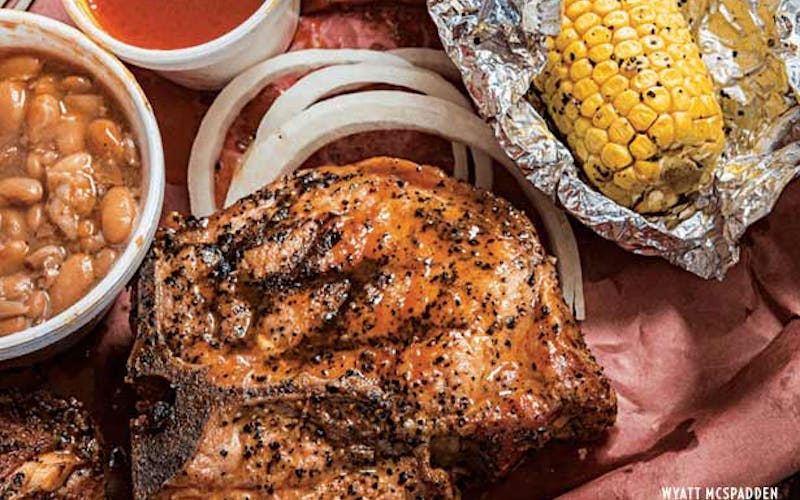 The Big Chop at Cooper's in Llano.
Wyatt McSpadden

Texas is in the midst of a barbecue renaissance, an age of smoky enlightenment. One need only sample the goods at new-guard establishments like Franklin Barbecue, in Austin, or Pecan Lodge, in Dallas, to realize it. Yet in the face of all this newfangled excitement, Cooper’s continues to soldier on—an intrepid old-timer, a barbecue stalwart that has appeared on every single one of these lists. If it ain’t broke, as the saying goes, don’t fix it (or put sauce on it). There are a number of establishments across the state, affiliated and not, that carry the Cooper’s name (our favorite, after Llano, is the one in New Braunfels, a spanking-clean edition of the original that opened in 2008), but for pure, authentic grunge, we like this location, where if it’s a weekend in spring or summer, you’re likely to be waiting in line with a lot of bikers. Do as they do. First, eyeball the unbelievable array of meats in the immense serving pit—brisket, sirloin steak, pork chops, beef and pork ribs, cabrito, chicken, sausage. This is the most challenging part of the Cooper’s experience, because you have to choose the pieces of meat you’ll soon be eating, and the spectacle of that bounty has been known to overwhelm visitors and cause them to freeze up. Stay focused. The must-have is the pork chop, a two-inch-thick juicy slab, but get some of the smoky brisket too and at least one of the fat and bouncy beef ribs, which are coated in a thick, black, chewy crust. The chicken is moist and peppery, and the pork loin is super lean. The best sausage is the one with jalapeño in it. Having selected your meats, head down the line for sides (the jalapeño mac and cheese is excellent) and homemade desserts (apple, blackberry, peach, and pecan cobbler). Grab a cup of sauce from the condiments table—you won’t actually need any on your meat, but the thin, tart mixture is worth a dip. Finally, head into the capacious dining room and take a seat at one of the long picnic tables. This is, just as the name suggests, old-time pit barbecue at its best.