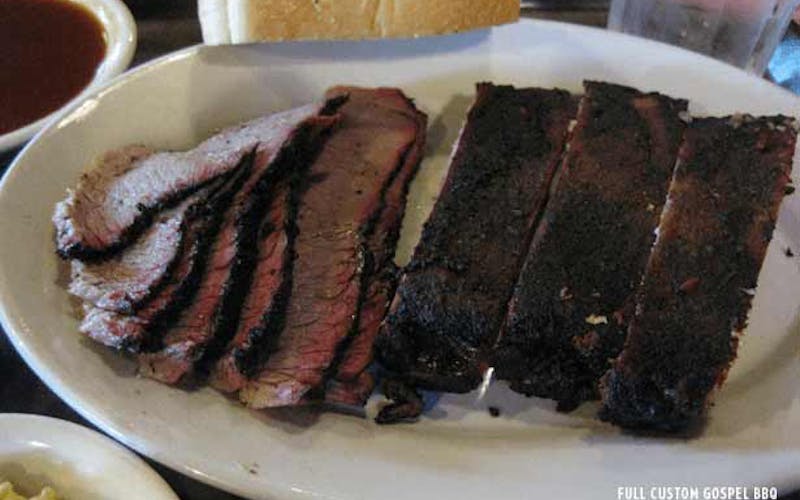 With six locations—two of which are in the Dallas–Fort Worth International Airport—this family-run operation could be considered a chain now and, thus, not admissible for this list. But rules are made to be broken, especially when a plateful of expertly smoked meat is before you. We still like the original Cousin’s. It doesn’t have much curb appeal: a plain joint located in a shopping center set back from a six-lane road on the outskirts of south Fort Worth. But the smell of smoke that greets you once you’ve walked through the glass doors lets you know you’ve come to the right place. The ordering process is classic cafeteria style. With tray in hand you drift down the line, inspecting the meats in front of you and directing the meat cutter as you wish. We highly recommend that you instruct him to slice from the fatty end of the brisket and keep it coming. When this joint is on its game, there’s no better brisket in Fort Worth. The smokiness pervades the meat, and the thin strip of well-rendered fat clinging to each slice adds a nice punch of saltiness. (You might be tempted to reach for the ever-so-slightly-tart sauce—molasses and tamarind are two of the sixteen ingredients.) Other meats are good but not flawless. Smallish and thin pork ribs were perfectly tender, but the rub was too liberally applied, masking some of the smokiness. The pulled pork was juicy and flavorful but could have used less sauce and more dark, crusty bits. If you have stomach space to spare after all that meat (or even if you don’t), turn next to the small side dishes that you inevitably added to your tray as you went down the line. The crispy fried okra, buttery mac and cheese, and gooey (but never goopy) peach cobbler will have you wondering if it’s too late to be adopted by Boots and Beverly (the old-timers who started Cousin’s). Luckily for you, the Paynes consider all of their loyal customers to be “distant cousins.” Just don’t expect to be given the family discount.