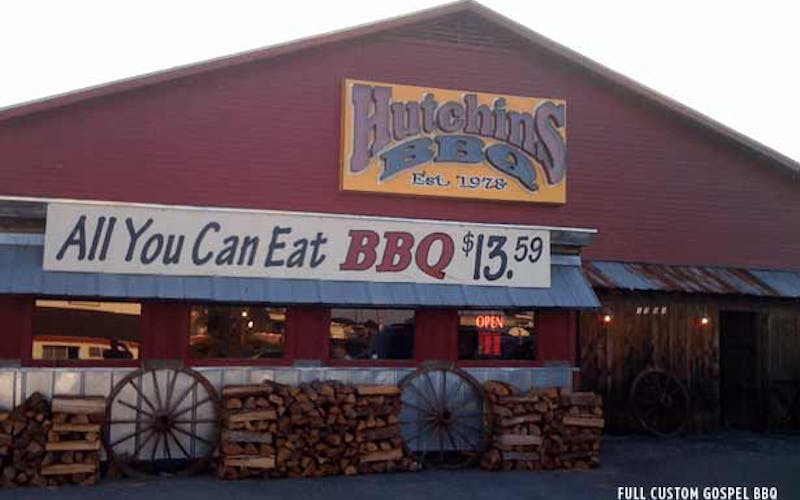 Hutchins BBQ's pit room was left in shambles after a June 2012 fire, but the father-son team of Roy and Tim Hutchins began to rebuild and reopened in November 2012.
Full Custom Gospel BBQ

Last June, after a one-alarm blaze left their pit room in shambles and their business on hold, the father-son team of Roy and Tim Hutchins began to rebuild. They documented the process on Facebook, offering reports from the construction site and musing about the psyche of the Texas barbecue purveyor (“A brisket sandwich was the very first thing I thought of when I woke up,” read one 6:34 a.m. post in early October). Finally, on November 15, they joyously proclaimed, “It’s go time!” and were back in business. This bit of news was “liked” by nearly 300 people. Count us among them. We rolled up to the barnlike joint (red-clapboard exterior, wood-paneled interior, parking lot full of pickups and SUVs) in February. The brisket—smoked for up to seventeen hours—was fatty nirvana, melt-in-your-mouth tender and haloed by a rosy smoke ring and a golden mantle of that blessed f-word (it could have stood an additional spanking of salt, though, and just a puff more of true smoke flavor). The St. Louis–cut ribs sported a sweet-but-not-too-sweet char and pulled nicely from the bone, and the sausage packed good flavor and a hint of unexpected heat. Sides were above par (particularly the broccoli slaw and dill-spiked potato salad), and the deep-auburn sauce earned our respect for its high pepper quotient.