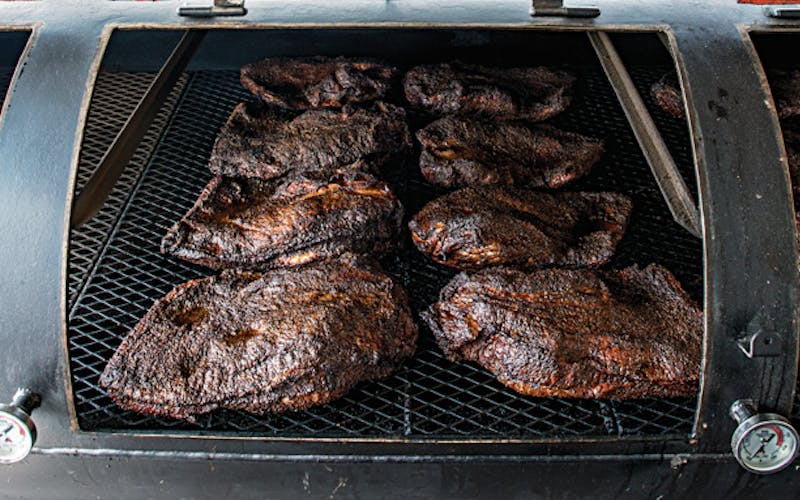 Briskets on the pit at La Barbecue.
Wyatt McSpadden

In this case, “La” is not a definite article referring to the “Cuisine Texicana” this relatively new joint says it serves; it’s an abbreviation referring to the first name of the co-owner LeAnn Mueller, granddaughter of the founder of Taylor’s famous Louie Mueller Barbecue (disclosure: LeAnn is a contributing photographer at Texas Monthly). Housed in a little trailer with a few picnic tables under old pecan and live oak trees, this eatery opened in 2011 as JMueller BBQ, the ballyhooed comeback of LeAnn’s brother John, who had run a well-thought-of joint on Austin’s East Side that went out of business in 2006. Enormously talented but famously ill-tempered, John lasted a little over a year here, before a spat with his sister caused a split between the siblings. LeAnn changed the name; hired pitmaster John Lewis, previously of Franklin Barbecue; and didn’t miss a beat. Her brother, meanwhile, went silent for a spell, only to resurface yet again at John Mueller Meat Co.

If you set aside the complexity of this labyrinthine family drama, however, what you’ll find at La Barbecue is the beautiful simplicity of some expertly smoked meat. Lewis has made three changes since taking the helm—he built a new pit, began ordering USDA Prime brisket, and started making his own sausage. On a recent visit, the brisket, which he cooks for twelve to fifteen hours at about 275 degrees, had a dark-red smoke ring and fell apart on our butcher paper. We picked up our first moist piece with our fingers and noticed no chunks hanging below, a sign of perfectly rendered fat. The salt-and-pepper rub on the fatty bark hit just the right mix with the smoke, and the lean was equally impressive. (Lewis told us that he’s been getting more smoke absorbed into the meat by using a wet rub of hot dog mustard and pickle juice and finishing it off with salt, coarse pepper, and garlic powder.) A massive beef rib had that classic Louie Mueller exterior, and we twisted off a one-inch hunk for a taste. It was flawless: juicy and smoky, with the richness you’d expect. The sausage had an unusual but welcome kick, and the succulent pulled pork had been moistened with a tangy vinegar-based sauce. Chipotle coleslaw (which is sometimes a little too spicy) and classic potato salad rounded out a top-notch meal. A while back, after he left Franklin Barbecue, Lewis was considering moving out of Texas, but he has since become part-owner of La Barbecue, so we should have him around for a long time. This is especially good news, because in April he unveiled his huge new personally designed pit, which is producing even better results than before, if that is possible.