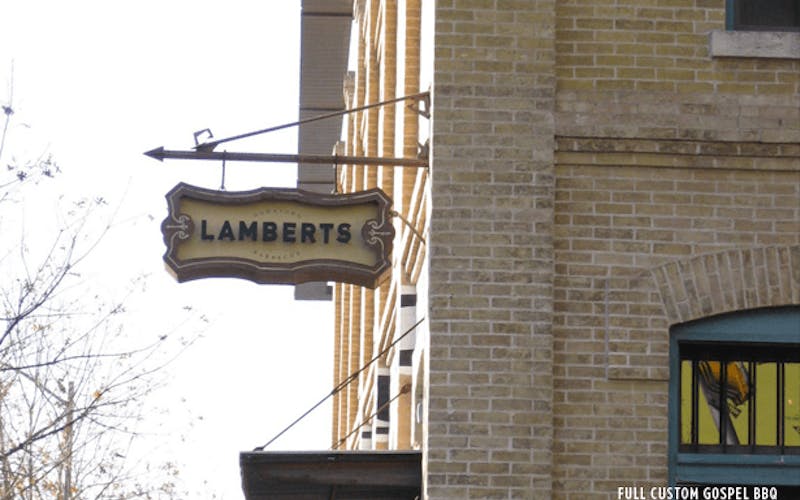 Some people may be turned off by the description at the bottom of the Lamberts menu: “Fancy Barbecue?” But there are so many outstanding dishes at this establishment, we urge you to put preconceived notions out of your mind. Plus, the restaurant (we can’t bring ourselves to call it a joint) is housed in a historic, brick-walled general store built in 1873, so at least it has an old-fashioned feel. The brisket, rubbed with brown sugar and coffee, has a good crust, and while the lean was a little dry, the fat on the moist slice was nicely rendered. It doesn’t have the powerful smoky flavor a wood pit produces, but executive chef (not, technically, pitmaster) Zach Davis does very well with his gasser. The pork ribs, crusted with a fennel and coriander rub and maple glaze, were a little overcooked but still yummy, and the jalapeño sausage had a decent kick. The chicken rubbed with achiote and lime was soft and flavorful. Three sauces were equally tasty: a thick house sauce with a good tang, a hot sauce that was similar to the house but with heat, and a yellow mustard with a light tang. Side dishes were out of this world. That’s usually a backhanded compliment but not meant to be one here—homemade mac and cheese came fresh-baked from the oven, the potato salad had a good snap, the collards were tender (with bacon!), and the slaw was lightened up with cilantro. We finished with bread pudding that was heavy on the whiskey, wishing we had more room.