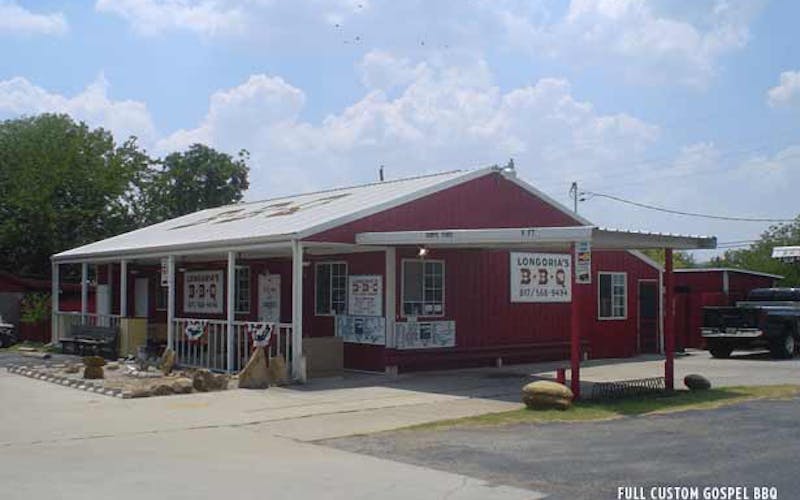 Rating: 4
Opened: 1995
Pitmaster: David Longoria, age 50 (since 2002)
Method: Post oak and a little pecan; indirect-heat pit
Pro tip: The beef jerky—made with brisket and cured in the pit—is an excellent gift, if you don’t eat it all on the drive back.

In 1975 a Bell Helicopter employee named Fidencio “Fred” Longoria began making his own sausage in his kitchen at home. He wanted to create links as good as those he remembered eating in Gonzales as a child. In 1990, after years of tinkering, he finally solidified his recipe for sausage made of coarsely ground brisket that’s smoked for hours over oak. With that recipe as his secret weapon, he opened Longoria’s. It’s no wonder Fred’s son David, who now runs the restaurant—a corrugated-metal shack with tables on the porch and a drive-through window in what was once Everman, now part of Fort Worth—refused the chance to be on Guy Fieri’s Diners, Drive-Ins, and Dives when he learned he’d have to divulge his father’s prized formula (we know it involves a filling of 100 percent ground brisket and a mouthwatering blend of spices). They happily give away free samples of this signature item at the counter, though, as you mull over their other menu choices, which include brisket burgers. So what about the brisket itself? We found it to be a tad on the dry side but infused with a palate-pleasing smokiness. The massive pork ribs, on the other hand, were juicy and flavorful, had just the right amount of char, and threatened to break our plastic plate—also laden with slaw and green beans. If we’d been able to eat a bite more, we’d also have ordered the homemade tamales and chorizo.