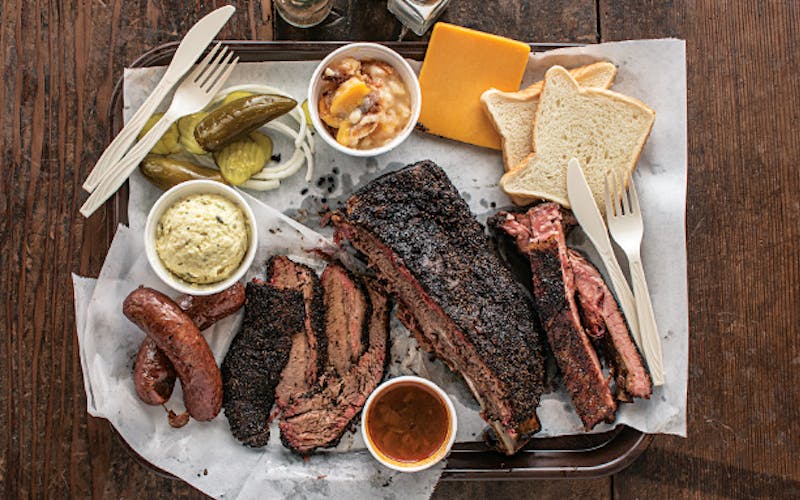 A tray of meat featuring the massive beef rib, as well as brisket, sausage, and pork ribs.
Wyatt McSpadden

Louie Mueller Barbecue has been described as a “cathedral of smoke,” and indeed, many of the trappings of organized religion are present here: the sacramental offerings, the priesthood in their ecclesiastical red apron-robes, the flock of devoted congregants, even the disciples (Austin barbecue star Aaron Franklin credits bite of brisket on a trip to Louie Mueller in 2002 with his own conversion to the fatty faith). At most other joints, this level of veneration might feel off-putting, but Louie Mueller earns every bit of it. Not only has it been in business for 64 years (54 at the present location, which was formerly a gymnasium), but it also consistently delivers some of the best barbecue the state has to offer. On our last visit, the brisket, ringed with a finger-width coarse-pepper crust, was the Platonic ideal of the Central Texas meat-market style—the fat was rendered to perfection, and the smoke-infused meat was so tender that even the idea of a fork and knife seemed preposterous. Louie Mueller is justly famous for its massive beef rib, a prehistoric sampling of fatty deliciousness so rich that one bite has been known to induce dizziness and swooning. Similar beef ribs can now be found on the menu at no fewer than three new Austin joints, but nothing compares with the original. Eating the beef rib at Louie Mueller—bone in hand, surrounded by the soot-stained walls and blackened wood ceilings that have resulted from half a century of smoking—is probably the most primal experience Texas barbecue has to offer. Other meats shine as well. Pork ribs are solid; the all-beef sausage, which is made in-house, has a nice peppery flavor and a great snap, but if you really want a kick, don’t miss the excellent jalapeño variety, as brilliant a use of this ubiquitous chile pepper as we’ve seen. Sides are standard and barely merit a mention, but only a fool would waste space on them anyway. Even the sauce seems designed to get out of the way—it’s an unusually thin, tomato-based broth best used on the bread. Just after our last top fifty list was published, in 2008, Louie Mueller’s son Bobby, who had operated the joint for 34 years, died. The torch has now passed to Bobby’s son Wayne, and after an adjustment period, the restaurant is as good as it’s ever been. If we have one complaint, it’s that Wayne has been introducing noncanonical dishes, such as pulled pork and sweet-and-spicy baby back ribs. Both are excellent, but it’s sort of like showing up for Sunday services at the Catholic church and getting a Baptist revival.