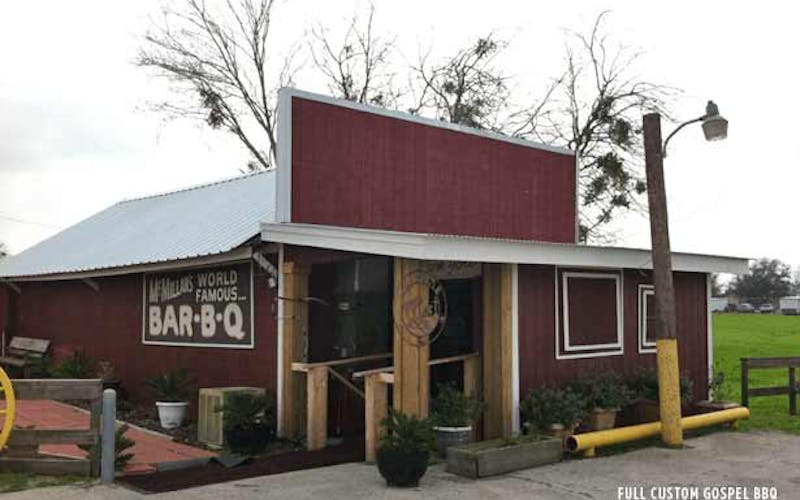 The tiny town of Fannin is famous for exactly two things. The first is for being the site of the 1836 Battle of Coleto Creek during the Texas Revolution, where Texians under Colonel James W. Fannin surrendered to the Mexican army, only to be marched to Goliad and executed en masse several days later. The second (and happier) source of the town’s notoriety is that it is home to a tidy red building with a corrugated roof from which issues forth the best smoked meat in Goliad County. Welcome to McMillan’s Bar-B-Q. Located on a lonely stretch of U.S. 59 between Goliad and Victoria, it’s one of those out-of-the-way places that barbecue hounds love to stumble upon. There is a comfortable covered outside seating area, and inside, where chatty, engaging owner Louis McMillan presides, it’s cozy and stuffed with memorabilia, featuring autographed one-dollar bills from customers. The star of the menu is the brisket, as you might expect. McMillan smokes it for fifteen hours using an unusual combination of oak, mesquite, and pecan. Our sampling featured a camera-ready crust that tasted as good as it looked. The sausage was firm, with a nice snap to it, and a good balance of meat, salt, and fat. The sides—beans, potato salad, and slaw—were solidly tasty, and the sauce, medium-thick and with an eye-opening vinegar zip, was outstanding. The only disappointment was our order of St. Louis ribs, which lacked texture and were a bit on the fatty side—not terrible, but nowhere near as good as that brisket.