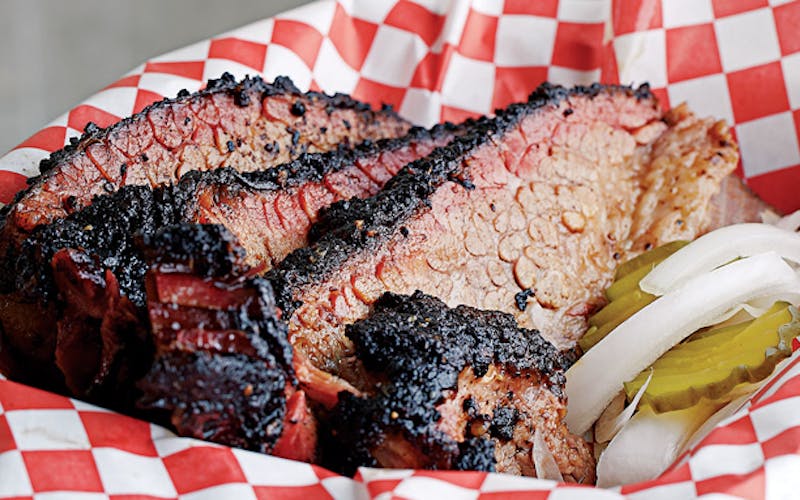 Rating: 4.75
Opened: 2010
Pitmaster: Justin Fourton, age 37
Method: Mesquite; indirect-heat pit
Pro tip: If you have a group, go for the Trough, a sampler of all the meats that will feed—and amaze—four to five people.

Shed #2 at the Dallas Farmers Market is a vast, enclosed, and fully air-conditioned structure that essentially serves as a city-owned food court where up-and-coming restaurateurs crowd in to show off their skills. The unquestioned anchor tenant of this gastro-carnival is Pecan Lodge, a three-year-old barbecue joint producing what is hands-down the best smoked meat in North Texas. It’s easy to find because their counter is just inside the front door, and also because a line of fifty or more people is hard to miss. They’re all here for the barbecue (all right, a few are here for the excellent fried chicken or the stuffed sweet potato known as the Hot Mess), and the line hasn’t gone anywhere since Pecan Lodge was featured on the Food Network about a year ago.

Suffice it to say, this is not your typical joint, and it does not have a typical origin story. Not so long ago, co-owners (and husband and wife) Justin and Diane Fourton had busy corporate jobs as management consultants for Accenture. Looking to slow down, they left the rat race and started a catering company, serving mostly Southern food. Justin, who is from Abilene, had learned to smoke meat from his grandparents and turned out to have an unusual knack for it (he’s also a voracious ’cue hound who constantly travels the state trying other joints, which is actually uncommon for a pitmaster). His barbecue quickly attained local renown, and once they added the farmers’ market booth, in 2010, things pretty much blew up. So much for slowing down. Even though they’re open just four days a week, an average workday for Justin lasts sixteen hours and one of those off days is dedicated to stuffing two kinds of homemade sausage by hand.

It still beats the rat race. Fourton’s pork links have a nice paprika kick and a strong mesquite flavor, and a beef sausage with fresh jalapeño and cheese is our new favorite. The pork ribs are juicy but can sometimes be a little heavy on the sweet glaze. A heavily smoked crust and rendered fat are laced together in a pile of pulled pork, which even purists will be tempted to dunk in the sweet vinegar dipping sauce. You won’t need a drop of sauce, however, to enjoy the beef. Gargantuan beef ribs are nearly always expertly smoked. The right level of tenderness is hard to achieve on this fatty cut, which requires real patience. Fourton struggled one month when his beef supplier kept sending him ribs that weighed in at two pounds apiece and simply would not get tender. But things must have worked themselves out. On our last two visits, the beef ribs were exceptional, with silky fistfuls of pepper-coated meat that easily came away from the bone.

As for the brisket, the first bite reminds us of the heights that this cut can achieve in the right hands. Each slice has the aggressive smokiness we expect from mesquite, but it doesn’t come along with any of the creosote flavor that is often that wood’s downfall. The fatty end is devilishly rich, but it’s in the lean end that Fourton really shows his ability. The flat, as it’s known, is very easy to dry out from overcooking, but his lean slices are impeccably moist and need only a slight tug to separate. If too much dried-out barbecue has you questioning the simple perfection of smoked brisket, Pecan Lodge will restore your faith.

Confronted with such a selection of meats, you may despair at the thought of sides, but do save room or you’ll be missing some of the best mac and cheese in Texas (flecked with bacon and green chile) and excellent collard greens with just a hint of brown sugar. Banana pudding fans will love this version, made from Diane’s grandmother’s recipe, and the newest dessert addition, peach cobbler with a sugary crumbled topping, is rightfully gaining popularity. Getting a taste of Pecan Lodge’s wondrous grub means a bit of a wait (up to an hour on weekends), but any hardships will be forgotten when you’re wiping that speck of beef rib off your chin.