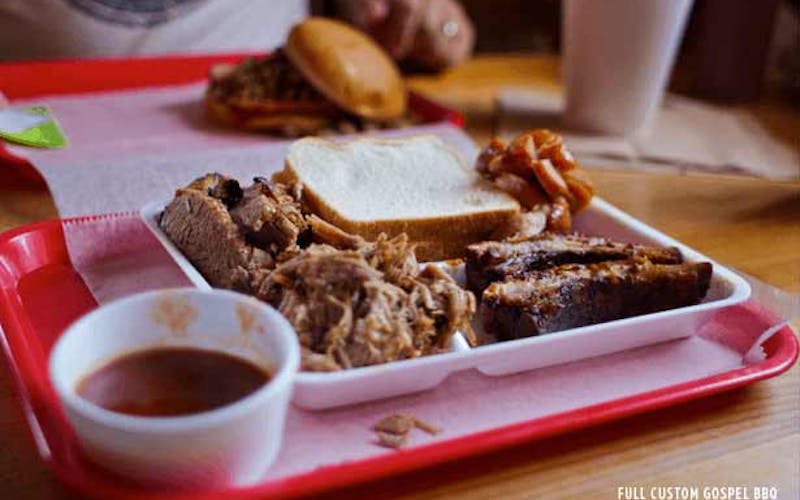 Owner Nick Pencis isn’t going to take it anymore. For years he felt compelled by regional tastes to serve lightly seasoned briskets without a speck of fat on them. But when he renovated his restaurant in 2012 (adding a new bar and patio along with an impressive pit room), a few of the menu items got a makeover as well. The brisket now receives a more aggressive dusting of salt and coarse black pepper, and just as important, the servers don’t automatically trim it anymore. He’s also replaced a boring commercial sausage with a special-recipe pork sausage from a local butcher shop. Both changes constitute major improvements for a joint that was already great, largely on the basis of the pork ribs. It’s the ribs that justify that adjective in the place’s name (that and Pencis’s infectious humor). These baby backs, rubbed with an eleven-spice mixture, are saucy, messy, sweet, and delicious. We’d prefer a deeper smokiness or a more well-defined bark, but it’s not hard to clean the meat from these bones. Another standout at Stanley’s is the smoked turkey—peppery and moist and surely among the state’s best. We also like the pulled pork, which has a few crispy bits of bark sprinkled in and a good vinegary sauce. Now that Central Texas–style brisket and sausage have been added to the menu’s East Texas specialties, we recommend going all in and getting the four-meat sampler platter. No sides come with this protein fest, so you can concentrate on the main event. Unusual for a barbecue joint, Stanley’s serves breakfast and dinner in addition to lunch, so feel free to eat here three times a day.