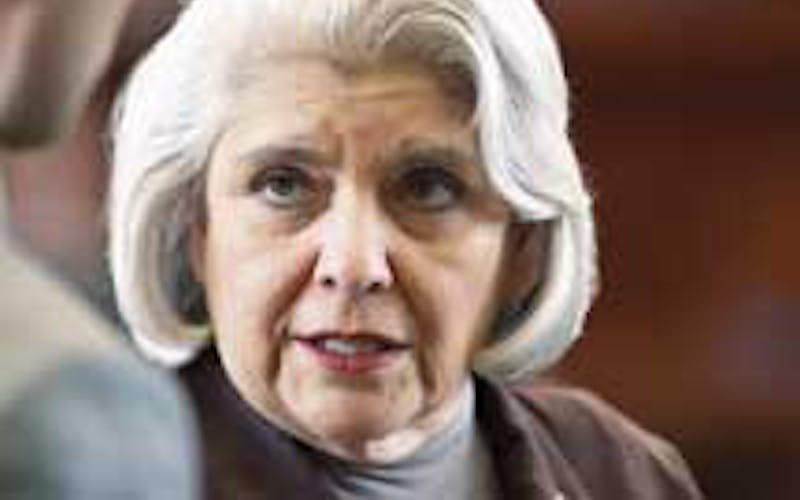 They say politics is the art of compromise, but nothing brings people to the table like a little bloodletting, which reminds everyone why compromise is usually a good alternative. This is why it’s useful to have a veteran brawler like Judith Zaffirini on your side. All session long she waged a two-front war against two of the most powerful men in the Capitol—Rick Perry and Steve Ogden—and somehow managed to remain standing. Ogden named Flower Mound Republican Jane Nelson the chair of his subcommittee on Medicaid, but it was clear from the start that Zaffirini was the key player on the panel—charged with finding billions in cuts to the costly program—because of her encyclopedic knowledge of the health and human services budget and her ability to line up the Democratic votes Ogden desperately wanted. After personally consulting with each of the agency heads, Zaffirini presented Ogden with a bottom-line funding level she could live with in a list of critical programs. Z, as she is known, got some of what she wanted—softening many of the most painful cuts—but balked when Ogden let Nelson steer the lion’s share of the money to other priorities. Ogden could have patched things up, regardless of who was in the wrong, but stubbornly refused. Zaffirini, known for her long memory when it comes to slights and insults, became a steely-eyed “no” on the budget from that moment on, and other Democrats followed her lead, dimming Ogden’s prospects for a bipartisan budget.

Ogden retaliated by cutting Zaffirini out of the budget-writing loop on her other passion, higher education. But Zaffirini, who chairs the Senate’s Higher Ed Committee and counts University of Texas System chancellor and Laredo native Francisco Cigarroa among her friends, refused to be sidelined. She led the successful push back against Perry’s plan, hatched by the Texas Public Policy Foundation, to limit research spending and make faculty compensation contingent on controversial productivity measures. She shared inside information with reporters—about the hiring of TPPF’s Rick O’Donnell as a highly paid but short-lived special assistant to the UT System Board of Regents, for example—and prodded Dewhurst into naming her to a newly formed legislative oversight committee for higher ed reforms, effectively reasserting the Legislature’s control over the state’s institutions of higher learning.

As the session wound down, she enjoyed a last laugh of sorts in her war with Ogden too. When Perry demanded that the Senate pass a bill tying higher ed funding to graduation rates before he would sign off on a budget deal, Ogden had to get the bill out of committee in a hurry. You can guess which Senate committee it was in. “Dewhurst came to me on the floor and said, ‘Now, you’re going to pass out HB 9, right?’ ” Zaffirini said, smiling. She passed it, all right, but not before the bill was amended to her liking.