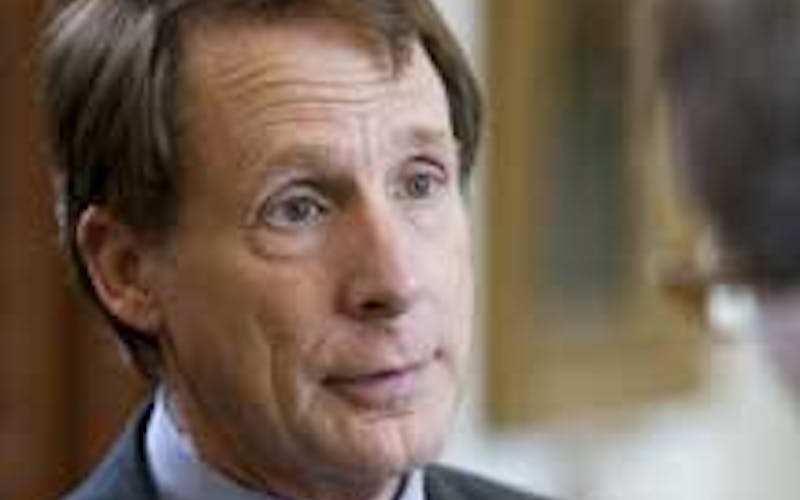 Legislatures can’t function without members like Robert Duncan. “He has become the fixer,” one colleague said of the soft-spoken attorney from Lubbock, who seems to find himself doing more than his share of the Senate’s heavy lifting every session. This time around Duncan spent months negotiating “loser pays,” a controversial bill backed by perennial lobby heavy hitter Texans for Lawsuit Reform that forces plaintiffs to pay the other side’s legal fees if a judge determines that a lawsuit is frivolous. Duncan has always been sympathetic to tort reformers, but in recent years he has pushed back against overreaching by TLR, showing an independent streak that has caused his stature to grow at the Capitol. As filed, loser pays was so hostile to plaintiffs that it was possible to actually win a suit and still have to pay the defendant’s legal fees. Negotiations came to a head in mid-May with seven straight days of talks, at the end of which Duncan reached a compromise that constituted a minor miracle: A terrible bill had been pounded into a consensus document agreed to by both TLR and its archenemy, the Texas Trial Lawyers Association. “Nobody but Duncan could have done that,” said one participant in the negotiations.

What did Duncan do for an encore? He stepped in to jump-start the stalled negotiations on reforming the state’s regulation of hurricane insurance, an issue that had the same two combatants, TLR and the TTLA, embroiled in another death match. Dallas senator John Carona, a master negotiator himself, was stuck, despite months of diligently plugging away at a compromise. Duncan couldn’t rescue the deal before the clock ran out, but watch for him to play a key role when the issue comes back up during the special session.

The secret to Duncan’s success is that people genuinely like him. He can occasionally sound like a professor on the Senate floor, but he doesn’t demagogue, and he takes pains to never embarrass another member. As a result, when he speaks, members of both parties listen. When freshman senator Brian Birdwell tried to hike college tuition for DREAM Act students—undocumented kids who grew up in the U.S., excelled in school, and are trying to earn a green card by finishing college—­Duncan rose in opposition. “This amendment doesn’t solve any problems,” Duncan said. “It’s symbolic, and I think the symbol is not one that we’d be proud of.” Birdwell, happy enough to debate the Democrats who opposed his measure, had no stomach for taking on Duncan. He withdrew his amendment and sat down.