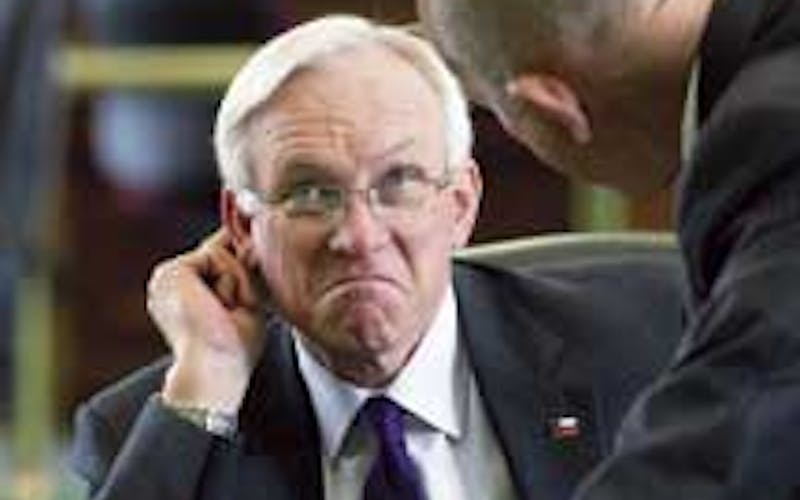 On May 3, as the Senate debated whether or not to bring to the floor the most important and divisive piece of legislation of the session, the budget, Democrats rose one after the other to speak in protest. It is customary at such times to begin by praising the chair of the committee that has produced the bill, but considering how angry the Democrats were about the budget, you might have assumed that their paeans would be hollow. In fact, they seemed remarkably sincere, which tells you everything you need to know about Finance chair Steve Ogden. After a tribute from Democratic senator Mario Gallegos, Ogden gave a wan smile. “What I really need is a couple of votes,” he responded. Added to the nineteen Republicans, this would have been enough to get the budget to the floor. No such luck. Instead, the lieutenant governor trampled Senate tradition by allowing the budget to be considered on a “House Bill Day,” when only a simple majority vote was needed, and passed it on a party-line vote, which hadn’t happened in decades.

The sequence of events captured the ambiguity of Ogden’s session. The starched former submarine officer, now an oil and gas producer, labored mightily to create a budget that both Republicans and Democrats could support, but try as he might, he couldn’t do it. Some would say that this was Ogden’s fault. Others might say, more plausibly, that the opposition party was never going to vote for such a lean budget; still others would point the finger at Dewhurst for his flip-flop on using the Rainy Day Fund. Pick your poison. But no one would say that Ogden didn’t try.

All session long, the strongest call for leadership on the budget remained Ogden’s opening-day speech upon becoming president pro tempore, when he goaded his colleagues to fix the school finance system and the business margins tax. As Finance chair, he drove the Senate to produce a budget that, while lean, was far more generous than that of the House, whose leaders caved in to the governor and the tea party elements of the Republican caucus.

Is the final budget a good one? No, it’s horrible. Its ruinous effects will be felt for years. But it could have been worse, and the main reason it wasn’t was Ogden. When the governor, the lieutenant governor, and the Speaker were showing no leadership, Ogden was doing what he always does: finding a way to stretch every dollar, making the best of a bad situation.