THE BEST: Will Hartnett 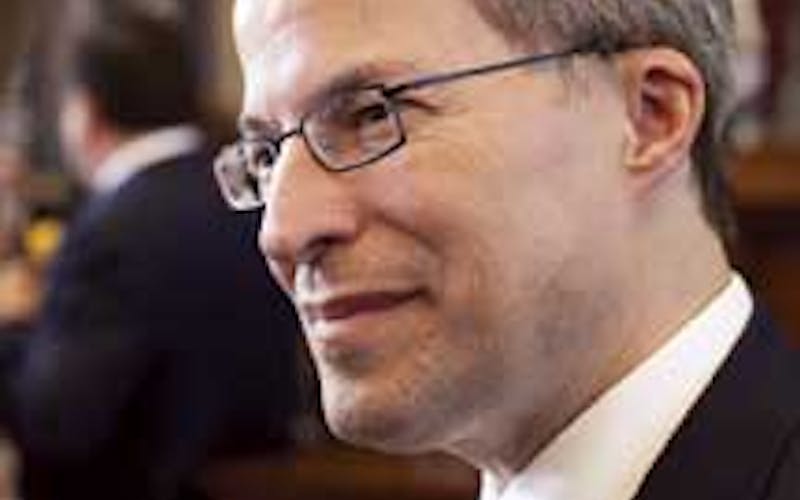 What’s black and brown and looks good on a lawyer? Two Dobermans. What happens when a lawyer becomes a godfather? He makes you an offer you can’t understand.

Everybody likes lawyer jokes. The trouble with Will Hartnett is that he’s giving lawyers a good name and spoiling the fun. Hartnett is a quiet, unassuming sort who goes about his business, session after session, with little fanfare, passing bills on such scintillating subjects as notices of lis pendens and power of attorney. Then along comes a situation where the House needs a sharp legal mind who can rise above politics and carry out the law with impartiality and integrity. When that occurs, Hartnett is first on the list of candidates.

Such a situation arose on November 2, 2010. When the results of the legislative race for District 48, in Travis County, were posted, only 16 votes, out of more than 50,000 cast, separated Democrat Donna Howard and Republican Dan Neil. A recount and an election contest were likely to follow. Speaker Straus named Hartnett to be the master of discovery, the member who would oversee the process. He had handled similar contests in other sessions but never one with such partisan overtones. Democrats wondered if Howard could get a fair deal from a House with a Republican supermajority. According to the rules, Hartnett would make his decision and forward it to a nine-member bipartisan committee; the committee could either accept his decision or send it to the House floor for a vote. When Hartnett determined that Howard had won by a mere 4 votes, the committee accepted his ruling by a 9–0 decision. His reputation for fairness and professionalism averted the specter of a partisan fight on the floor of the House.

Later in the session, Hartnett introduced an unusual piece of legislation, especially for a session in which any issue having to do with immigration or citizenship was potentially explosive. It was a resolution urging the federal government to grant a conditional green card to noncitizens who arrived in this country before the age of sixteen and have earned a high school diploma in the United States, to allow them to enlist in the armed forces and be granted citizenship after four years of service. In a bipartisan tribute to Hartnett, Democrats and Republicans fanned out across the House floor, collecting signatures in support of the resolution. It passed by a vote of 149 to 0.