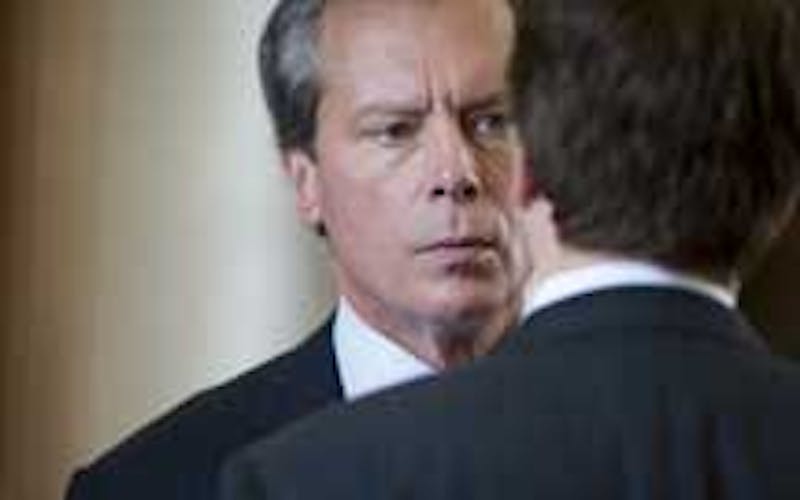 As president of the Senate, Lieutenant Governor David Dewhurst presides over a chamber with 19 Republican senators and 12 Democrats, but he likes to remind reporters—lest they forget how important the presiding officer really is—that there are actually 32 people on the Senate floor. Most of his colleagues, regardless of party, will tell you that things would have run better this session with only 31. Still, Dewhurst is technically correct, and it is in that spirit that we take the unusual step of including the president of the Senate on our list of Worst Legislators. Dewhurst took a difficult situation and made it worse. His Finance chair, Steve Ogden, worked for months to build consensus among his fellow Republican senators to use the Rainy Day Fund to at least partially address the enormous shortfall in the 2012–2013 budget, despite growing pressure from Governor Perry’s office not to tap the fund. Dewhurst signed off on the move in a private meeting, and Ogden finally got his budget out of committee and onto the floor.

Then Dewhurst pulled the rug out. “It was a little bit of a surprise to me,” he told reporters five days after the committee voted to use the fund. A steady drumbeat of criticism from Michael Quinn Sullivan, it seems, had Dewhurst thinking about the implications for his possible run for the U.S. Senate next year. Confronted by an outraged Republican caucus, Dewhurst retreated, issuing a letter admitting that he had in fact agreed to the deal. “He still didn’t seem to understand the severity of what he had done,” said one Republican senator. In the days after Dewhurst’s flip-flop, the Senate descended into chaos. Conservative senators, already nervous about being labeled spendthrifts, were now unsure of Dewhurst’s support. They abandoned the budget deal, and Ogden was forced to pick up the pieces. In the end, the Rainy Day Fund came out of the mix. “We got rolled by Perry,” as one Republican senator put it.

The episode was classic Dewhurst: not sure where he should be on any given issue, not very deft at getting there. Even when the lite guv tried to do the right thing this session, his instincts were poor—as in the airport screener “groping” sideshow that erupted in the last week of the session. Alarmed by an eleventh-hour warning from the Transportation Security Administration that flights in Texas might have to be canceled if the state tried to prosecute TSA screeners for inappropriate touching, Dewhurst decided that the bill, sponsored by conservative standard-bearer Dan Patrick, was a bad idea. So far so good. But, according to senators on the floor at the time, rather than directly confront Patrick, Dewhurst quietly asked Austin Democrat Kirk Watson to line up “no” votes—while Patrick was busy laying out the bill. When the bill went down, Dewhurst clumsily tried to place the blame on Watson, but an angry Patrick—whose own instincts rarely let him down—saw through the subterfuge and immediately went on the attack. Two days later, after questioning whether Dewhurst had what it took to stand up to the federal government, Patrick announced his own U.S. Senate exploratory committee. Ladies and gentlemen, the lieutenant governor, rolled again.