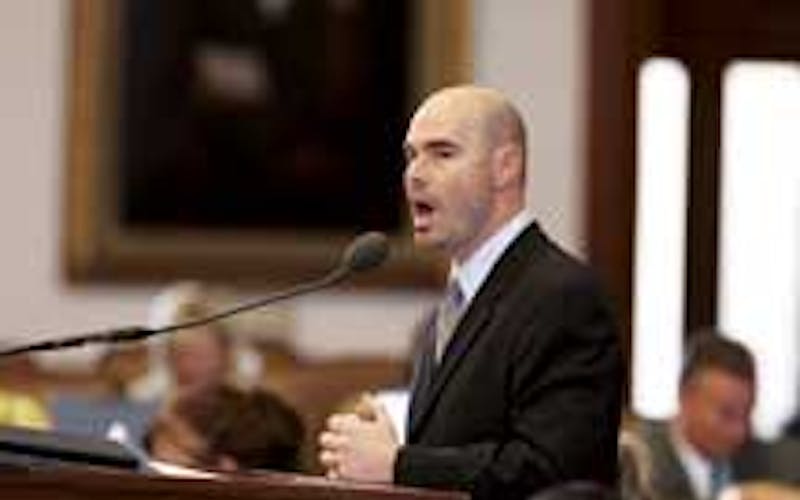 The Eighty-second Legislature was a mad, mad, mad, mad world for Dennis Bonnen, and no one was madder than Bonnen himself. Perhaps it was his committee assignments. It was said that he wanted to be chairman of Calendars, and he didn’t get it. The chairmanship of the Sunset Committee was offered but he didn’t want it and remained vice chair. The rest of his assignments were good: chairman of the Select Committee on Voter Identification and Voter Fraud and seats on Transportation and Higher Education. Few members had such a diverse portfolio, and yet Bonnen continued to play the enfant terrible of the House. He wanted to put the University Interscholastic League under the scrutiny of the Sunset process; when it didn’t happen, he erupted into a rant of accusations that a Democrat was blocking him. During the session, he offered virtually no help to Glenn Hegar, his Senate cohort in overseeing Sunset, leaving Hegar to do all the heavy lifting. Similarly, he punted on the bills in his voter fraud committee and had them re-referred to the Elections Committee. He was also a frequent no-show on Higher Ed.

This was not the Dennis Bonnen members had known in past sessions, the man so intrigued by politics that he’d begun his public service as a House sergeant at arms. This year he drifted petulantly through the chamber; his biggest contribution was presiding from the lectern in Joe Straus’s stead. Any hope that he would elevate his behavior evaporated in the closing days with a series of peevish maneuvers. First he tried to stick an amendment on a pollution bill that, to quote an opponent, “basically gave immunity to an [industrial facility] for damaging someone’s property.” The amendment was so awful that the bill’s backers were forced to disavow it. A couple of days later, Bonnen followed up this performance with a churlish question from the back mike regarding the whereabouts of the Speaker and his chief of staff—never mind that everyone knew that negotiations involving the House leadership were going on all over the Capitol. Finally, as the last minutes for passing bills were ticking away on the night before sine die, he made a motion to suspend the midnight deadline for passing bills and consider every remaining bill on the calendar, a rare and frowned-upon procedure. Luckily the motion did not pass. And with that, Bonnen blew out of the Eighty-second Legislature just as he had blown in, mad, mad, mad, mad.