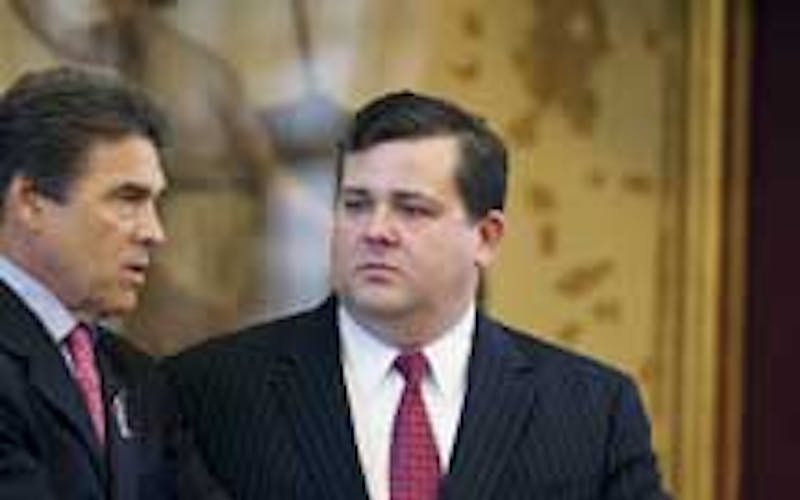 A legislative accident waiting for a place to happen. Larry Phillips desperately wants to be a respected player in the big game, but even after five sessions, he has yet to figure out that respect can’t be manipulated; it has to be earned. His first impulse in any situation is to try to demonstrate that he’s a big shot, which is a sure sign that he isn’t. He got off to a bad start last fall, becoming embroiled in controversy concerning perceived threats made on behalf of the incumbent Joe Straus during the Speaker’s race. Phillips denied involvement, and a probe by the House General Investigating and Ethics Committee proved inconclusive, but the episode still hung like a cloud over the beginning of the session.

Meanwhile, Phillips was busy doing the sorts of things that win you a nomination for the Worst list: heckling colleagues from his perch near the back mike with witticisms like “You’re wrong!” Or tacking bad amendments onto innocent bills. We see a glimmer of hope in Phillips. He has talent and moxie. The missing ingredient is work ethic. Somewhere along the line, he appears to have come to the conclusion that because he is a committee chairman (Transportation), he doesn’t have to do his homework and he doesn’t have to be able to give a clear description of what his bills do. Consequently, members don’t trust him. This was evident during debate on the TxDOT sunset bill, when he painfully tried to explain why his proposal to expand the role of the state infrastructure bank was a good idea. At the very least, he should have been aware that many members are suspicious of anything TxDOT wants. The only way to succeed was to make a strong case for the bank, but his inability to articulate the policy issues doomed his efforts. A slow learner, he tried to tack an amendment onto an unrelated bill to help deer breeders, despite a previous agreement by stakeholders to forgo changes to the bill. He failed again. The lesson is straight from the Boy Scouts: Be prepared.