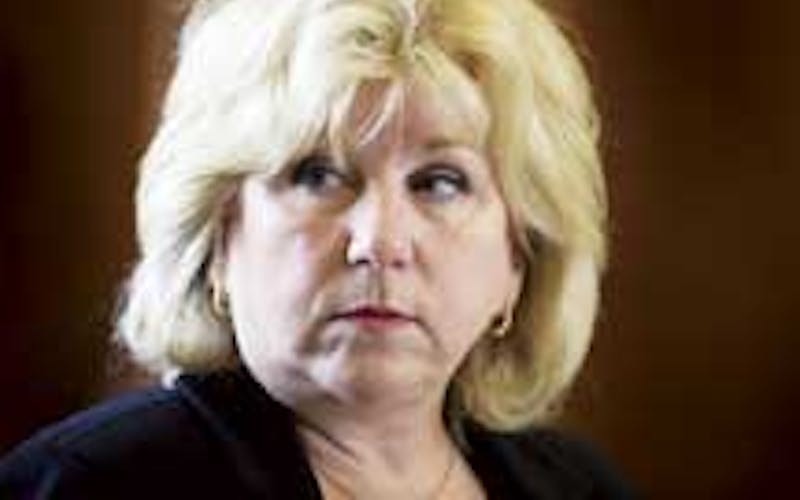 Jane Nelson spotted something she didn’t like at a March 14 meeting of the subcommittee she chaired on Medicaid, the state’s health insurance program for poor children, pregnant women, the disabled, and nursing home residents. In light of the enormous budget shortfall, she had been asked to find cost-saving opportunities in the program, which accounts for roughly a quarter of the state’s entire annual budget. “This contact lens benefit drives me absolutely crazy!” she said. “I have two schoolteacher daughters, and neither one of them have contact lenses covered. Is there some medical reason why a person would have to have contact lenses over eyeglasses?” Well, yes: Only people who have had cataract surgery qualify, an agency representative told Nelson, and the savings from cutting the benefit would be minimal. “I see that, but that one drives me crazy,” Nelson replied. It was one of many moments this session that crystallized why Nelson was such a poor choice to oversee this part of the state’s budget: There is a knowledge gap, which—given the will—is perhaps correctable, but there is also a compassion gap, which is perhaps not.

Cutting billions from Medicaid was one of two thankless tasks doled out by Senate Finance chair Steve Ogden; the other—cutting $4 billion from public education—was given to Plano Republican Florence Shapiro. The two committees were a study in contrast, with Shapiro’s running relatively smoothly and Nelson’s veering all over the highway. Republicans Bob Deuell and Kevin Eltife found themselves reaching across the aisle to join social services stalwarts Judith Zaffirini and John Whitmire in putting the brakes on shortsighted cuts, as Nelson, who has emerged as a kind of party whip for the Senate’s right wing, rolled her eyes and grew more and more frustrated. “Let’s put a face on the taxpayer” was her memorable response when Whitmire urged his colleagues to “put a face on the cuts”—as though low-income Texans are somehow exempt from paying the same regressive sales tax everyone else pays.

Nelson’s bill to expand Medicaid managed care will help close the gap somewhat, if it passes in the special session. But in the end, the budget largely punted on Medicaid, shorting caseload growth by roughly $4.8 billion—which we will have to pay, most likely from the Rainy Day Fund, in 2013—and assigning phantom savings to riders requesting waivers from Washington that are unlikely to be granted. The only real effort to address the underlying cost drivers in Medicaid were found in a package of reforms that could gradually move us in the direction of rewarding doctors not for the number of procedures they perform but for keeping patients healthy. Nelson’s name is on those bills, but everyone knows the ideas in them are Dewhurst’s, as was the political muscle that got them out of the Senate. Nelson’s name is also on the Interstate Health Care Compact bill, a vain effort to wrest control of the state’s Medi­caid program from the federal government. More of a poke in the eye at Washington than a sincere effort at reform, the bill isn’t worth the considerable time the Legislature has already devoted to it. Nelson didn’t think that one up either, but the spirit of the bill is 100 percent Jane.