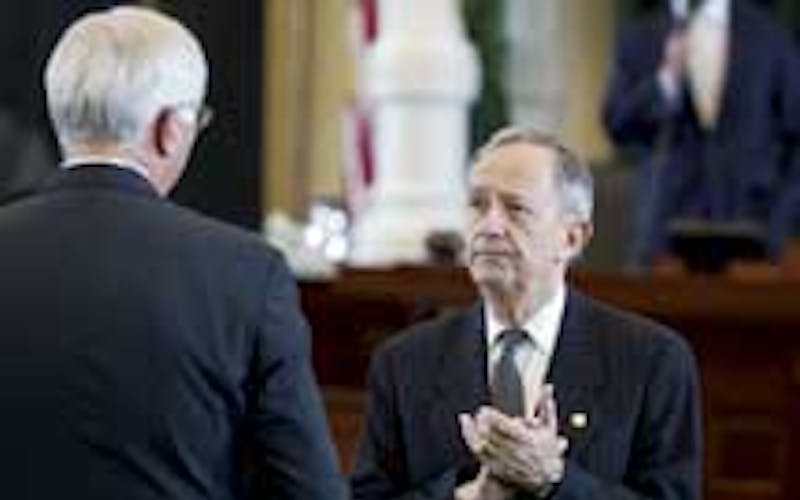 Jeff Wentworth never wanted to come back this session, and many of his colleagues wish he hadn’t. Wentworth wanted instead to be named chancellor of the Texas State University System, but he lost out last summer to then state representative Brian McCall. His decidedly unstatesman-like letter of protest to the Texas State board of regents—he was “personally offended” that a “Johnny-come-lately opportunist” was chosen over him—offered a hint of the type of legislator we would see this session: not the respected independent thinker of past years but a more obstinate, irascible, and angry version of  his former self.

Deprived of his committee chairmanship—Dewhurst gave it to somebody else when Wentworth told him, somewhat too hopefully, that he’d be moving on—Wentworth had nothing to occupy his attention this session, aside from a strange obsession with allowing college students to carry concealed handguns on campus. “Campus carry,” as it became known, was opposed by most university administrators and would have affected only a small minority of students anyway, since you have to be 21 to get a concealed handgun permit. But Wentworth, who was on the UT campus during the Charles Whitman shootings, clung to the bill as if it were his life’s work. After a failed attempt to get the bill to the floor—two of his yes votes flipped on him unexpectedly—he tried for weeks to bring it back up, even refusing to pause for 24 hours so that Senator Wendy Davis, who opposed the bill, could leave town to see her daughter graduate from college. (In a display of the collegiality the Senate is supposed to be known for, Senator Kevin Eltife offered to change his vote temporarily so Davis could leave.)

Unable to get the bill to the floor, Wentworth tacked it onto Judith Zaffirini’s major higher education reform bill, forcing her to temporarily pull it down rather than see his amendment become law. Wentworth then hijacked one of Senator Steve Ogden’s fiscal matters bills, a painstakingly crafted compromise weeks in the making that had to pass in order for the budget to balance. When the House declared Wentworth’s amendment non-germane, Ogden was obliged to ask his conservative colleagues, all big supporters of the Second Amendment, to vote to strip it off—in essence, to make an anti-gun vote.

Even Wentworth recognized how tiresome his crusade had grown by the end of the session. “I never would have taken up so much of the Senate’s time if I had been allowed to bring it up the first time,” Wentworth told the press table. Yes, and if the board of regents had just given him that job, we wouldn’t have taken up your time with this sad story.