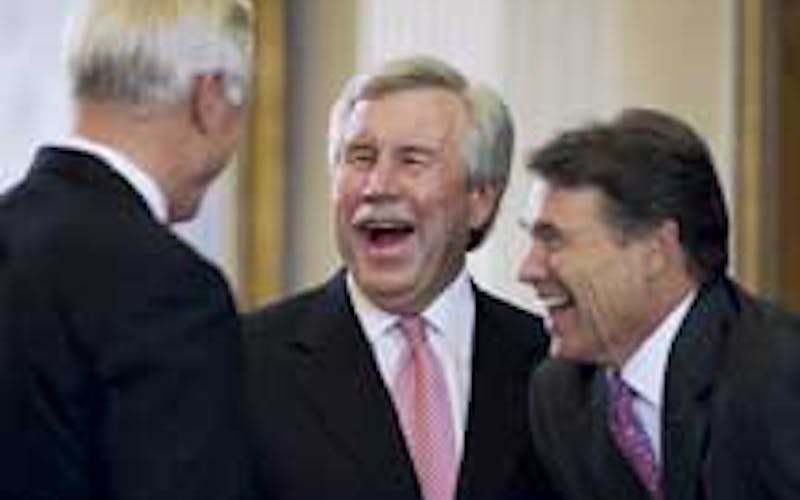 Troy Fraser’s opponents complain that the hulking Hill Country Republican likes to throw his weight around, but having him on your side of an issue can be dangerous too. Take solar energy. Last session, as chairman of the Business and Commerce Committee, Fraser tried and failed to pass a bill promoting the state’s budding solar industry. Bumped down this session to the Natural Resources Committee, Fraser insisted on keeping utility regulation in his domain, giving him another shot at the solar incentives bill. He did not make the most of it. Fraser nudged aside a proposal from Kirk Watson in favor of his own measure, which called for a fee on utility bills to support a solar panel rebate program. But Fraser couldn’t—or wouldn’t—generate enough consensus to get the bill out of his own committee. “That’s classic Fraser,” said one Capitol insider. “Insisting on controlling the play, then failing to make any play at all.”

“When he gets interested in something, he’s actually quite sharp,” one lobbyist said. “But his field of interest is pretty narrow.” How narrow? Fraser’s Natural Resources Committee handles all pollution bills. His counterpart in the House, Jim Keffer, negotiated all session long with the natural gas industry on legislation to regulate fracking, and the bill Keffer finally passed out of the House generated considerable media attention. But Fraser must have been watching a different channel. “We’re two weeks away from the end of the session,” he complained when the bill hit his committee, “and I found out about it three days ago.” We could go on, but we’ll stop there. Doesn’t that pretty much say it all?