Proving the skeptics wrong, the Eighty-third Legislature accomplished most of what it planned to do. Our twenty-third roundup of the Capitol’s saints and sinners reveals who we can thank—and who we needn’t. 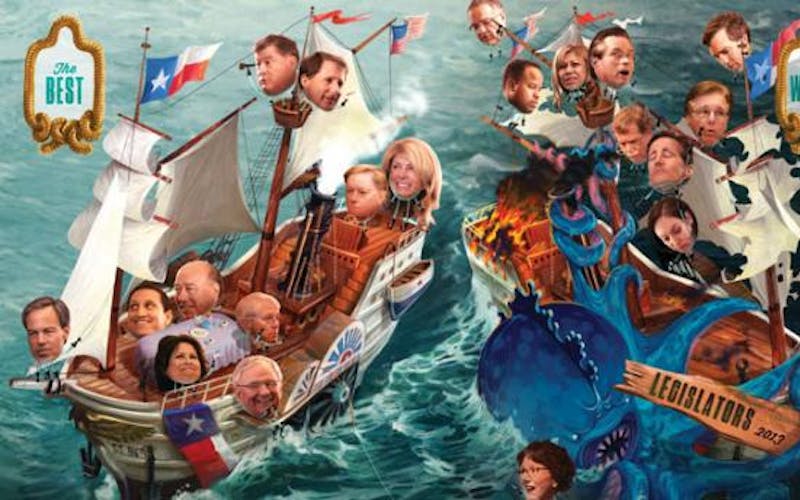 Every legislative session has its own narrative. The narrative of the Eighty-third Legislature was about atoning for the sins of its predecessor. To be fair, the lawmakers of the Eighty-second drew the blackest of all black beans: a $27 billion shortfall, which necessitated mammoth cuts in state services (more on that in the Worst list). The Eighty-third was a different story entirely. What had seemed to be a looming disaster simply melted away. Lawmakers returned to the Capitol to find that the state had a surplus of $8.8 billion and an overflowing Rainy Day Fund. By the time they put the finishing touches on the new budget, most of the cuts inflicted two years ago had been reversed. Moreover, budget writers took advantage of the situation to tend to some long-neglected needs, including water. (The most notable failure in this regard was to find some middle ground on Medicaid expansion, which would have gone a long way toward improving the health care crisis among our poorest residents.) And in response to a huge backlash from teachers and parents on high-stakes testing, the Legislature passed one of the most sweeping education bills in recent memory, which lowered the number of end-of-course exams required for graduation and expanded pathways to earning a diploma.

Under such bright skies, it was a collegial session. The Senate, which was expected to take a turn to the right because of the addition of five new conservative members, retained its friendly, clubby character. And the House implemented “purple Thursdays,” as R’s and D’s alike demonstrated their disdain for the red-blue divide in American politics. But money only eases tensions; it does not change character. The fundamentals of Texas politics remained in place. Notwithstanding an oh-so-modest rebound by Democrats, this remains a conservative state, where the tea party is a presence of questionable power.

One of the fascinating aspects of the session was watching two of the state’s leaders return to jobs in Austin they had campaigned to leave behind. Governor Rick Perry suffered one of the most dramatic flameouts in modern history in the 2012 Republican presidential primary; Lieutenant Governor David Dewhurst was defeated in the Republican primary runoff for the U.S. Senate by a hard-charging Ted Cruz. With Perry and Dewhurst wounded, all eyes turned to Speaker Joe Straus, a moderate Republican who looked to find a coalition in a splintered House of Representatives. At times, he even found one.Our role in the grand drama that is a legislative session is to be present from the first speech on day one to the last gavel on sine die. Our writers follow the session on the floors of both chambers, in committee hearings, and in backrooms, all with the ultimate aim of selecting the Ten Best and the Ten Worst legislators. Over the years, we have come to believe that the most important element in legislative politics is not party or ideology but personality. Intelligence is rarely the deciding factor in one’s political fortunes. Rather, success in politics is all about well how one plays with others: who is fair, who is trustworthy, who offers help to his colleagues. These are the things that count—in bad times as well as good.

Additional research for this article by Lillie Noe and Laura Wright.