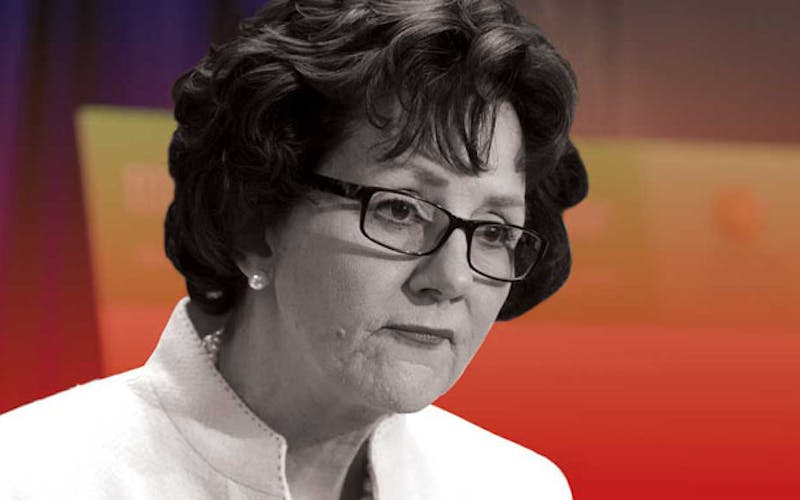 Let’s start with two simple premises. First, the $5.4 billion in cuts to education made in 2011 not only damaged the public schools but also threatened the legislative process this session because of the bad blood and lingering suspicion created by the massive reductions. Second, were it not for the poor budget forecasting of Comptroller Susan Combs, those cuts would never have happened.

Here’s why: the comptroller’s job is to monitor the state’s revenue streams and tell legislators how much they’ll have to spend every biennium. And because the state has a pay-as-you-go requirement, the comptroller’s revenue estimate is an actual restriction; lawmakers can’t spend more money than she says they can. Last time around, Combs predicted we’d have $73.4 billion to spend in the 2012–2013 biennium. But in January of this year, she announced that the state could expect to finish the biennium with an $8.8 billion “ending balance” (that’s accountant-speak for “surplus”).

We’re sympathetic to the fact that the economy has been volatile for the past few years, which makes the comptroller’s job trickier than usual. But if you take a closer look at this year’s estimate, the latest numbers show that the state had $90.2 billion available in general revenue–related funds during the 2012–2013 biennium. That’s a lot more than the $73.4 billion Combs allowed. About 23 percent more, in fact.

In other words, that $8.8 billion suggests truly excessive caution—or, to be cynical, truly excessive partisanship. Let’s not forget that at the same time that Combs was making such a conservative prediction about the budget, she (along with other statewide Republicans) was all too eager to talk about the “Texas miracle” of economic growth and job creation. Let’s also not forget the victims: not just students whose schools were affected by the cuts and the 25,000 state employees who lost their jobs to layoffs but the worthy legislative priorities this session that were made immeasurably more complex by the struggles over restoring the education cuts. But the Lege, and the state, won’t have to worry about Combs’s fuzzy math in the future. As soon as the session ended, she announced that she wouldn’t run for reelection.