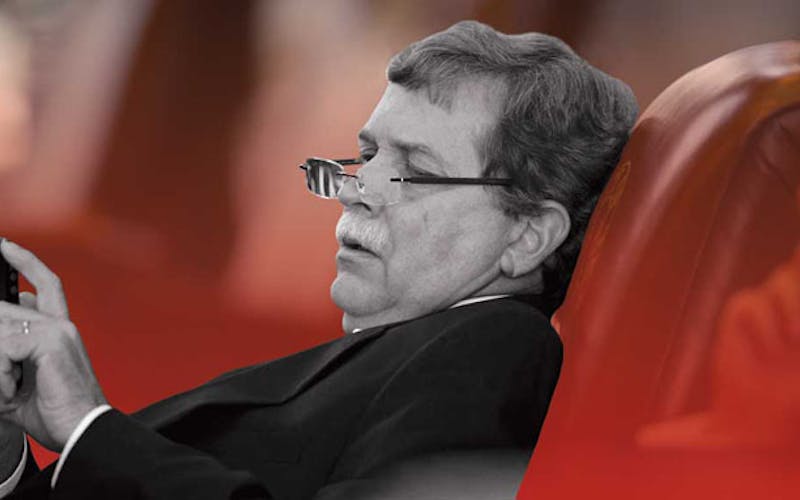 Three little words: No. Learning. Curve. In terms of raw intelligence, Lon Burnam sits at the top of the class. Sadly, he receives a failing grade when it comes to presenting his ideas in a way that will gain the support of his colleagues. At the start of the session, Burnam did yeoman’s work, explaining the impact that last session’s cuts to public education had had on local school districts and reporting on the failures of the state’s half-hearted attempt to restore the women’s health program. But Burnam, who is in his ninth term, can slip into a toxic mix of smugness and sarcasm that turns the voting board red faster than a proposal for a state income tax. Every time the subject of the budget came up, he appeared at the back mike to talk about only one thing: education, education, education. For all his acumen, he has never learned the art of persuasion.

Never was this flaw more evident than during the debate over an amendment to the appropriations bill to outline several provisions that had to be met if the state decided to expand Medicaid. Republican John Zerwas, a medical doctor from Richmond who is one of the House’s most well-liked members, consulted with Burnam on the amendment, which was similar to one introduced by Republicans in the Senate. In order to placate conservatives who were suspicious of Medicaid, it called for any expansion plan to be approved by the Republican-controlled Legislative Budget Board. But rather than let Zerwas, who might have been able to reassure his fellow Republicans, carry the ball, Burnam insisted on grabbing it himself and in the process botched the opportunity. The amendment passed, but it didn’t survive for long. Nervous Republicans made a motion to reconsider the vote, and Burnam pulled down the amendment. After all these years, he still lacks an instinctive understanding of his chamber’s moods—and that should be one of the first lessons a successful lawmaker learns.