New guv, new lite guv, new attorney general, new committee chairs: the Eighty-fourth Legislature had a lot to prove. So how well did its members do? 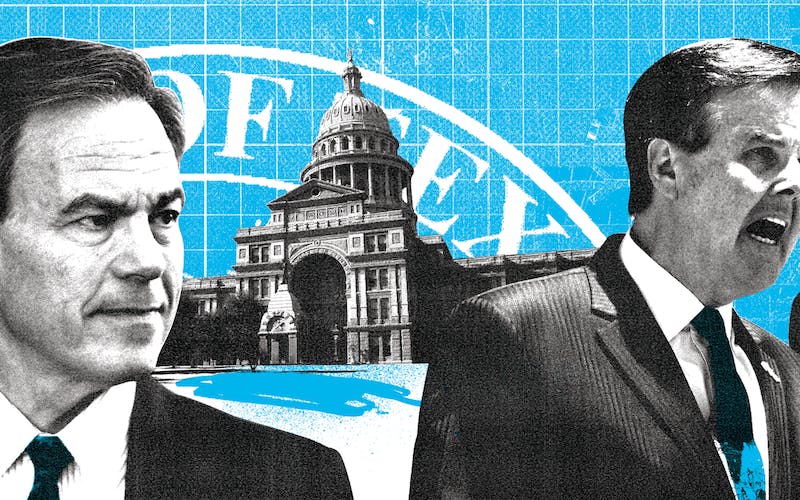 The Eighty-fourth Legislature was like a professional baseball team that had just seen many of its starters retire—or not have their contracts renewed by management. In the most dramatic changing of the guard in more than a decade, Texas elected a new governor, lieutenant governor, attorney general, comptroller, agriculture commissioner, and land commissioner (whose last name happens to be Bush, lest things become too unfamiliar). In the House and the Senate, a number of powerful committees in both chambers had new chairs, including House Appropriations and Senate Finance, which are responsible for the budget. As with any team, there were clutch hits, some dramatic runs, and a couple of embarrassing errors.

The session started on an uneasy note. Gun advocates descended on the Capitol in a show of force that led to heightened tension among some members. In one episode, open carry advocates entered the office of a state representative, and an unsettling exchange occurred before they finally left.

Not long after that, another state representative made ignorant comments about Muslim Americans and asked her staff to have visitors to her office renounce terrorism and swear allegiance to the United States (more about that in the Worst list). The weirdness continued when a conservative group announced that it had shot more than eight hundred hours of video of members and lobbyists in compromising positions—but then didn’t release any of it.

Once the Legislature settled in, however, the session lacked the fireworks seen in previous years. By far the most interesting dynamic was the relationship between Governor Greg Abbott, Lieutenant Governor Dan Patrick, and veteran Speaker of the House Joe Straus. For a time it appeared that sharp differences in the Senate and House tax plans would bring the whole session down, but in the end the argument was resolved, and the Lege was able to send a budget, which included $3.8 billion in tax relief, to the governor’s desk and avoid a special session.

As the calendar wound down, lawmakers passed a contingent of bills that balanced red-meat politics with public policy investment. There was money for border security—and funding for pre-kindergarten education. There were bills for open carry and campus carry—and $3.1 billion for university construction projects. The Legislature could also check off a box related to transportation. In the end, it did not move forward on school vouchers or the abolition of the DREAM Act for undocumented students who want to attend public universities.

As with every session since its founding, Texas Monthly was at the Capitol to cover the proceedings from the opening gavel to sine die. Over the 140 days of the Eighty-fourth Legislature, our team stayed late on the floor of the House and the Senate, watched countless committee hearings, and ate way too many meals in the Capitol Grill with staffers, lobbyists, and interested observers. All of that reporting culminates in our biennial list of the Ten Best and the Ten Worst legislators. We are not interested in ideology or grandstanding; we follow the major issues and look for those lawmakers who are thoughtful, trustworthy, and willing to work cooperatively with other members to make Texas a better place. That has been the hallmark of the Best and Worst list since 1973, and it remains so more than forty years later.