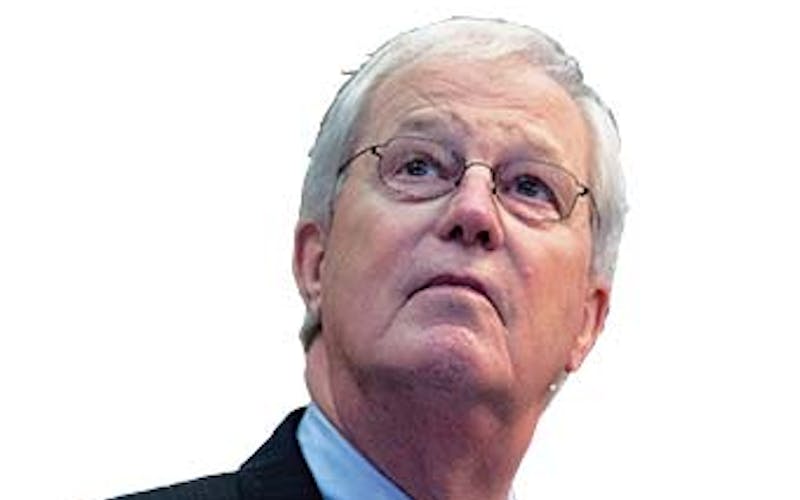 Charlie Geren is a thoroughbred politician, and like some of the most famous horses in history, he’s always at the center of the action, even if he doesn’t come in first. That’s fitting for the Bull of the Brazos, an award given to the lawmaker each session who blurs the distinction between saint and sinner the most. The honor is named for the late senator William T. Moore, an obstreperous conservative Democrat from Bryan for whom “the line between a scoundrel and a statesman can be hammered too thin to recognize.” As once was said of the nineteenth-century Irish patriot/villain Daniel O’Connell, “the only way to deal with such a man is to hang him up and erect a statue to him under the gallows.” Geren was the member who best fit that description in 2015—we leave it up to the readers to choose either a statue or the gallows.

Once described as the “glue that holds the House together,” Geren, as the longtime chair of the Administration Committee, knows how to make the chamber work. As a member of the Best list in both 2011 and 2013, he has also been an indispensable lieutenant of Joe Straus’s team. This session he proved to be instrumental in forging a compromise between the House and the Senate on tax relief, shuttling back and forth between the chambers and huddling with the governor’s staff. Lieutenant Governor Dan Patrick didn’t trust Dennis Bonnen, the House Republican who chaired the Ways and Means Committee, but he did trust Geren. And Geren’s leadership and tenacity helped ensure that a critical transportation bill made its way to the governor’s desk. “My job is to get the deal done,” he later said.

But Geren also set the tone for the pettiness that pervaded the House this session. After Representative Jonathan Stickland, a strong anti-abortion activist, placed a sign that said “Former Fetus” on the wall outside his office door, Geren removed it, saying that it violated rules dictating the display of signage in the Capitol. Stickland claims Geren ripped the poster down, which Geren denied. Stickland also said Geren threw the sign at Stickland’s staffer, frightening her, which Geren also denied. But the whole affair distracted from more-pressing matters at hand.

In a later incident, Geren put a cookie on a string and dragged it around the back microphone as Stickland was speaking. Witnesses said it was a taunt meant to distract Stickland, who has a generous waistline. Though Geren denied that the prank was aimed at Stickland—he says he was joking with another member of the House—it proved to be another unnecessary distraction. And even if it was good-natured, should the Administration chair really drag a cookie around the chamber while the House is in session? This was hardly the kind of maturity one expects from senior House leadership.