When Dallas grillmaster Tim Byres invited a few of his fellow chefs over for an outdoor shindig, there was just one rule: everything had to be grilled—even the bread, the salad, and the dessert. And the steak? That went right on the coals.

May 19, 2015By Texas Monthly and Patricia Sharpe

First, a Word About… 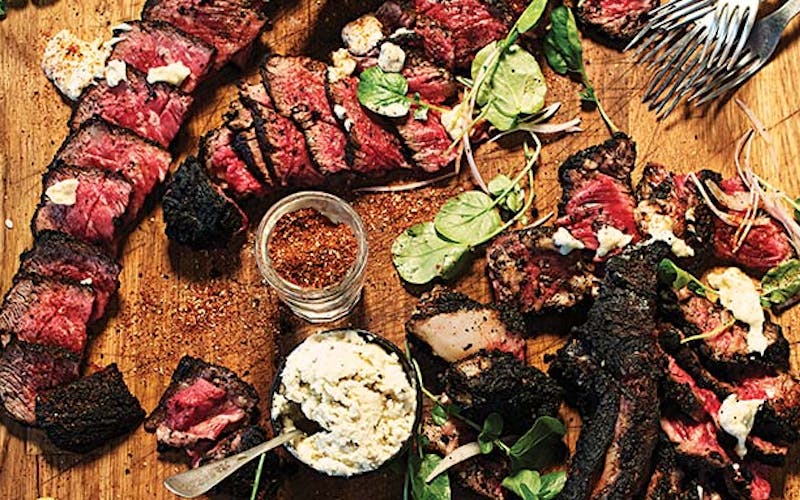 Tim Byres likes to play with fire—and smoke. He made his reputation smoking various and sundry meats at a Dallas restaurant named, yes, Smoke and then wrote a cookbook with the same title. He’s of the opinion that almost any food can be improved with a little smoke, or at the very least by being grilled.

A few months ago, prompted by a tantalizing rumor among fellow grilling devotees, Byres managed to track down a 1953 newspaper article that contained an outrageous recipe for something called the Eisenhower Beefsteak. It seems that President Dwight D. Eisenhower used to astonish guests at the White House by throwing enormously thick steaks directly on a bed of smoldering coals. Fascinated, Byres tried the technique himself and found that not only did it work, it produced delicious results. The steaks looked burned beyond redemption, but beneath a gleaming ebony crust was meat that was flowing with juices and tender as a lover’s kiss.

Eager to share his infatuation, he invited five chef friends to come to his other Dallas restaurant, Chicken Scratch, for an outdoor potluck*, stipulating that all their dishes had to involve smoking or grilling. Danyele McPherson, who is in charge of the kitchen at Remedy, brought a sweet potato salad jazzed up with smoked almonds. Matt Balke, the chef de cuisine at Smoke’s new Plano location, concocted a warm salad of lemon-spritzed artichokes and fennel. The owner of Italian trattoria Lucia, David Uygur, toasted thick slices of country bread and made a tomatoey bruschetta. Teiichi Sakurai, proprietor of Tei-An and Ten, gave chicken his trademark yakitori treatment. And Katherine Clapner, known for her confections at Dude, Sweet Chocolate, cooked up a crazy pineapple upside-down polenta cake in a cast-iron skillet on the grill. The delectable results of these recipes prove—perhaps once and for all—there’s no such thing as too much smoke.

First, a Word About…

“May God Be With You, My Dear Mrs. Kennedy”